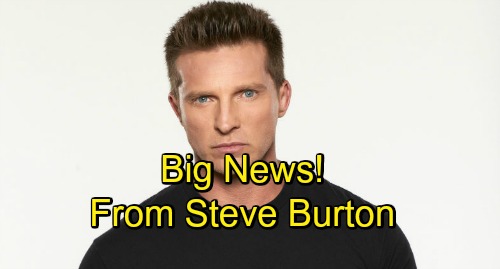 General Hospital (GH) spoilers is pleased to pass on some exciting news about a fan-favorite GH star. Steve Burton, who portrays Jason Morgan on the ABC soap, will soon be making some personal appearances at events in New York and New Jersey.

Steve will be performing a one-man show called “Flying Solo,” during which he’ll talk about his life journey, share family and GH stories, take questions from the audience, and pose for photos with event-goers. He’ll perform the show on December 8, 2018 at Governor’s Comedy Club in Levittown on Long Island, and on December 9, 2018 at Uncle Vinnie’s Comedy Club in Point Pleasant Beach in New Jersey.

And on the evening of December 8, 2018, Steve will host a private and intimate VIP dinner in Astoria, New York. Guests lucky enough to get tickets to the dinner will get to dine with Steve and get some one-on-one time with him. For more information on tickets to “Flying Solo” and the VIP dinner, check out the official Coastal Entertainment website.

Fans may remember that Steve and Bradford Anderson, who portrays Spinelli on GH, have been delighting fans with their “Stone Cold and The Jackal” show in various cities as well. “Stone Cold and The Jackal” is a hit and has terrific fan turnout wherever it goes. Both Steve and Bradford have posted photos from their shows on their social media accounts, and it looks like a great time.

One of the most exciting parts about Steve’s “Flying Solo” shows, aside from seeing Steve, will likely be the Q and A sessions. Fans will be able to ask Steve about GH buzz, his co-stars, and upcoming storylines. It seems that fans always want to know whether Jason and Sam will reunite, and what’s up with Jason having no romance for 5+ years.

What questions would you ask Steve if you had the chance? Stay tuned to the ABC soap and don’t forget to check CDL often for the latest General Hospital spoilers, updates, and news.