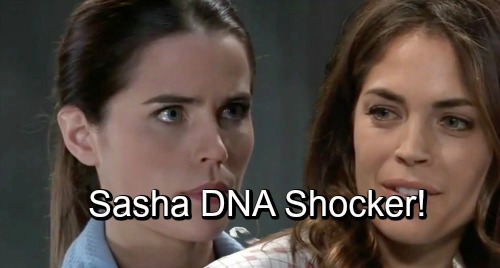 General Hospital (GH) spoilers tease that Anna Devane (Finola Hughes) may be on the verge of a shocking discovery. After Sasha Gilmore (Sofia Mattsson) is exposed as Nina Reeves’ (Michelle Stafford) phony daughter, Anna might have some compassion and dig a little deeper. She could resolve to find out exactly who Sasha is and what her story entails.

After all, Anna went on a search for her own child. She ended up finding Peter August (Wes Ramsey) right there in Port Charles. Anna and Peter still don’t have a real relationship, but at least Peter can tolerate being in the same room together. He can even engage in a short conversation, which is progress for these two!

Once Nina realizes Valentin Cassadine (James Patrick Stuart) deceived her, she’s sure to be devastated. Anna knows what it’s like to be manipulated by Valentin. He made Anna believe she had a daughter instead of a son and insisted that daughter was in a loving home.

Anna later discovered Cesar Faison gained control of Heinrik early on. That was thanks to Valentin as well, so he’s consistently had a hand in major drama. Valentin regrets giving Peter to Faison as a tot, but Anna still doesn’t trust him. His manipulation of Nina proves Anna is right to be wary.

Anna will remain suspicious of Valentin and the DNA tests he ordered. Her fears might fade slightly when she hears about Curtis Ashford’s (Donnell Turner) involvement, but she’ll still be uneasy. After all, anyone can be duped by Valentin – including Curtis. That’s obviously the case here since Curtis has no clue Sasha isn’t Nina’s real daughter.

When Anna finally meets Sasha, she may notice what GH viewers noticed right off the bat. Sasha bears a striking resemblance to Britt Westbourne (Kelly Thiebaud), so General Hospital may play that up. Anna might suspect the DNA matches because Sasha is a close relative of Nina’s. That could put her hot on the trail and lead to the whole truth.

Anna may guess Sasha is either a previously unknown sister of Britt and Nathan West (Ryan Paevey) or possibly Britt’s secret daughter. She could probably investigate through her WSB connections and figure out the lab locations. Since Britt is living with Anna right now, it’d be easy to get her DNA without her knowledge. Anna could hope to solve the puzzle on her own before she lets anyone else in the loop.

Regardless, Anna’s got the skills to sort this mess out. One way or another, she could get the proper blood samples and have them tested. Anna would want a comparison done between Sasha and Britt. The results could confirm Anna’s suspicions and bring some big surprises for all parties involved.

If Liesl Obrecht (Kathleen Gati) secretly had Sasha, she probably would’ve given her away at birth. If Sasha was Britt’s teenage love child, she might’ve chosen to give her up or had her taken away by Liesl. Anna’s potential DNA comparison may match more genetic markers for Sasha and Britt. She could see that they’re a far closer match than Sasha and Nina.

General Hospital spoilers state that some shockers are still to come in this hot plot. How does Sasha fit in this family? Is she Britt’s secret daughter? Could she be her younger sister instead? We’ll give you updates as other GH news comes in. Stay tuned to the ABC soap and don’t forget to check CDL often for the latest General Hospital spoilers, updates and news.