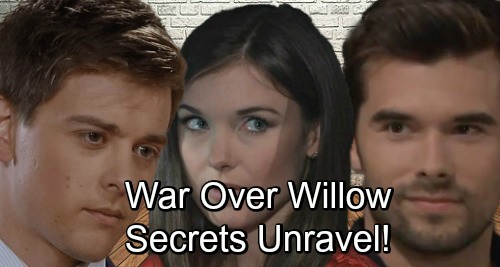 Chase (Josh Swickard) hasn’t had a lady in his life since he came to Port Charles. He shared a few kisses with Nelle (Chloe Lanier), but that was all part of his ruse to bring her down. Chase is ready for a real romance, so he asked for Willow’s phone number. Now the race is on! If Chase has a hard time gathering up his nerve, that might give Michael a chance to make his move.

However, Chase has far more swagger than Michael. He admitted he’s a little rusty when it comes to dating, but even his failed attempts at humor are cute. Michael seems to be more Willow’s type, but Chase is stepping up and making his interest clear. That’ll earn him some points as this love triangle kicks into high gear.

Once Michael finally gets enough courage to ask Willow out, she’ll probably admit she’s taken – or at least that things could be moving in that direction. GH fans know Chase and Michael have become pals lately. Their Nelle nightmares brought them together for a scheme, but now they’ve bonded in the aftermath. It’s like they’re part of a special club for Nelle victims.

Chase and Michael made a connection over the baby drama as well. Kim (Tamara Braun) insisted the crash wasn’t a factor in “Jonah’s” death, but the guys felt some responsibility for it anyway. They have the potential to be best buds, but this Willow war could derail that plan. If Willow gives both of them a chance with a date or two, it could rev up quite a battle.

Of course, Willow is being awfully secretive. She lied about being at GH for the bereavement group. Willow’s admission that she’s been out of the dating game for a while must tie into that. Was that because her boyfriend or husband died? Could she somehow be Wiley’s mysterious birth mother instead? Either option could’ve forced her love life to take a backseat.

If Willow’s beau or hubby passed away, we have to wonder who he was and why he died. That might link to some secret that’ll explode or even play a role in some shocking return from the dead. You never know on a soap!

If Willow’s the birth mom, that means Julian (William deVry) could’ve filled her in on the dead baby swap. That would’ve been a good way to get her to back off. In that case, there’s even more chaos that could unfold around Willow.

Regardless, Chase and Michael will be part of Willow’s unraveling secrets. General Hospital is throwing them both into this story with a goal in mind. Willow’s mixed up in Aiden (Jason David) and Charlotte’s (Scarlett Fernandez) issues as well, so several hot plots will collide for major bombshells.