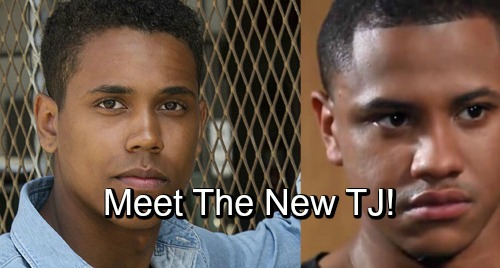 General Hospital (GH) spoilers have some casting news to pass on. Starting on Tuesday, November 20, there will be a new actor portraying the role of TJ Ashford. Viewers may have noticed that in the GH Thanksgiving promo, there’s a new face walking Jordan (Briana Nicole Henry) down the aisle at her wedding to Curtis (Donnell Turner). That’s Tajh Bellow, who has taken over the role of TJ.

TJ was previously portrayed by Krys Meyer in 2012, then most recently by Tequan Richmond from 2012-2018. Tequan has exited the role in order to star in the upcoming series called Boomerang, based on the Eddie Murphy film, to air on BET.

Tajh, the new TJ, is a newcomer to daytime, but he’s been active on the primetime TV scene in recent years. Among other shows, he’s appeared in Bosch, Filthy Preppy Teen$, and Gifted Hands: The Ben Carson Story.

Tajh will be taking over the role of TJ at an interesting time. TJ has been working on Stella (Vernee Watson) and trying to convince her to put aside her grievances with Jordan and attend Curtis and Jordan’s wedding, but so far Stella hasn’t budged. Perhaps he’ll finally find a way to get through to her, so that Curtis’ dream of having Stella attend the wedding will be realized.

Hopefully with the recast, we’ll see TJ a bit more around Port Charles. It would be great to see him get a storyline of his own, or at least see him interact more with his mom and Curtis.

Are you exited to see the new TJ in action? Stay tuned to the ABC soap and don’t forget to check CDL often for the latest General Hospital spoilers, updates, and news.