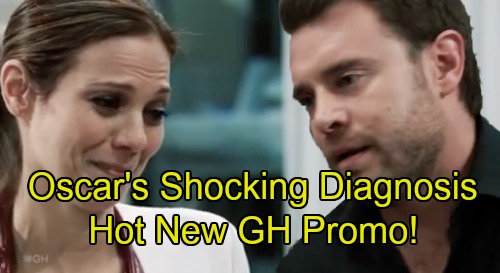 The GH promo begins by showing Oscar at the hospital looking confused and weak, with Kim rushing to his side. Kim is understandably shocked to see Oscar in this condition, and she looks desperate for answers about what has happened to her son.

The promo continues by showing Kim worried and likely wondering how she’s going to cope with her son’s serious condition. Kim’s used to treating others and sometimes being the bearer of difficult news, but it’s another matter completely when she gets bad news about her own son.

The good news is that Oscar seems conscious and alert, although a bit groggy, throughout the promo. Josslyn (Eden McCoy) appears to visit Oscar and expresses concern at his condition. Drew (Billy Miller) also appears and asks Kim what’s wrong with their son.

Unfortunately, it looks like Oscar may suffer from a serious condition, as Kim is shown telling Drew that “It’s not ok, and it’s not going to be.” What could Oscar be suffering from? A neurological disorder of some sort might cause his seizures, and that would be very serious.

Be sure to stay tuned to find out what’s wrong with Oscar. We’ll give you updates as other news comes in. Stay tuned to the ABC soap and don’t forget to check CDL often for the latest General Hospital spoilers, updates, and news.