General Hospital (GH) spoilers for Thursday, April 12, tease that Ava (Maura West) will fish for more info on Griffin’s (Matt Cohen) dilemma. She decided to sneak a peek at the paternity test results, but they didn’t offer the whole story. Ava only knows that Patient A and Patient B were a match. She’ll hope she can learn more during a chat with Griffin, but she may be out of luck.

Griffin will suggest that he’s going to destroy the results and hopefully put them out of his mind for good. He’ll keep Ava out of the loop on the details, but he’ll argue that he’s made peace with his decision. After carefully mulling it over, Griffin has determined that keeping the secret is for the best.

Meanwhile, Nina (Michelle Stafford) will meet with Curtis (Donnell Turner) to get the scoop on Peter (Wes Ramsey). Curtis just admitted that he scored some dirt, so Nina will push him to reveal what he’s found. Let’s hope it’s something juicy! This could eventually put Nina on the path to the truth. 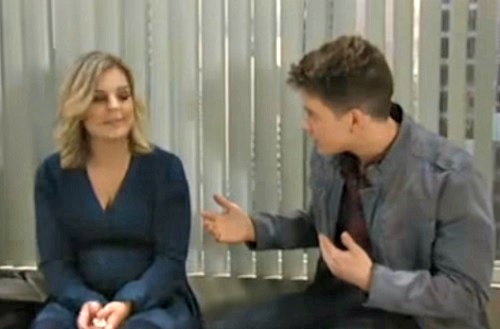 Other General Hospital spoilers say Lulu (Emme Rylan) will have a change of heart. She’ll tell Peter that she’s dropping her Heinrik investigation, but is that really true? Perhaps Lulu just wants to dig without Peter hovering. She may think she’ll have more success if she gets Peter off her back and goes out on her own.

Then again, Lulu will work on another story next week. She may get distracted by a different goal, but we know all roads lead to Heinrik. It’s the main storyline at the moment, so Lulu’s bound to be pulled into the drama again.

At GH, Maxie (Kirsten Storms) will bump into Michael (Chad Duell). They’ll discuss their impending bundles of joy along with all their baby fears. Michael will suggest that they can spot each other and that way they won’t be alone. He’ll want Maxie to know that she can count on him, so she’ll undoubtedly appreciate his kindness.

In the Corinthos home, Carly (Laura Wright) will speak with someone over the phone. She’ll suggest that there’s been a change of plan, so maybe she’ll back out of the doctor’s appointment she agreed to. Carly may have another strategy in mind as she works to prove her claims.

Nearby, it looks like Sonny (Maurice Benard) will confide in Max (Derk Cheetwood). He’ll still be concerned about Mike’s (Max Gail) loose lips. If Mike blabs about the field in Croton, it could destroy everything Sonny’s worked for. The last thing Sonny needs right now is for his past to come back to bite him.

It sounds like General Hospital has a great episode in store. We’ll give you updates as other GH news comes in. Stay tuned to the ABC soap and don’t forget to check CDL often for the latest General Hospital spoilers, updates and news.