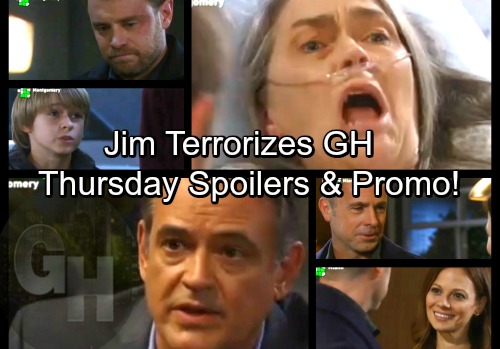 General Hospital (GH) spoilers for Thursday, April 5, tease that Kiki (Haley Erin) will try to set Dr. Bensch (James DePaiva) straight. At Kelly’s, Kiki will call the doc out for making unwanted advances. She’ll naturally have a huge problem with the kiss he planted on her.

Dr. Bensch will insist that Kiki sent him signals to express her interest. He won’t think it’s his fault that he misread them. Of course, Kiki won’t buy that for a second. She’ll snarl that she never sent out signals because she never wanted Dr. Bensch. Kiki will think the sleazy doc is just making excuses for his terrible behavior.

Meanwhile, Oscar (Garren Stitt) will be on cloud nine. He’ll tell Josslyn (Eden McCoy) that for the first time in his life, he gets to say he has his dad. Oscar is slowly building a strong relationship with Drew (Billy Miller), so that’s something he really appreciates. He’s wanted his father around for as long as he can remember and now that dream has finally come true.

Elsewhere, Julian (William deVry) and Kim (Tamara Braun) will sparkle as usual. They’ll enjoy some warm moments, but this isn’t the romance either of them really wants. Julian’s heart still belongs to Alexis (Nancy Lee Grahn) and Kim is longing for Drew. Nevertheless, Kim and Julian can at least be there for each other as kindred spirits.

Across town, Drew will run into Liz (Rebecca Herbst) and Jake (Hudson West). He’ll check in with them and get updates Liz’s current break from Franco (Roger Howarth). General Hospital spoilers say Jake will be bummed about the situation. He’ll tell Drew that he just wants Franco to come home.

Drew has made some progress with Franco lately, but he’s still got his fair share of issues with him. However, Drew will put those issues aside and offer Jake support. He might suggest that he’s sure everything will work out soon.

Alas, things are going to get worse before they get better and that’s all thanks to Jim Harvey (Greg Evigan). In Kevin’s (Jon Lindstrom) office, he’ll push Franco for more info. Kevin knows that Franco was afraid of Jim as a boy, but he’s not clear on the details. He’ll try to pry more out of Franco as they finish their hypnotherapy session.

In Betsy’s (Deborah Strang) hospital room, she’ll scream in horror! It looks like Jim may try to finish Betsy off so his secrets die with her. Will Jim be interrupted before he has the chance? Regardless, Liz and Jake will also land in harm’s way on Thursday. Jim will force them to leave GH at gunpoint, so General Hospital fans can expect more chaos.

Some serious excitement’s ahead in Port Charles. We’ll keep you posted as other GH news comes in. Stay tuned to the ABC soap and don’t forget to check CDL often for the latest General Hospital spoilers, updates and news.