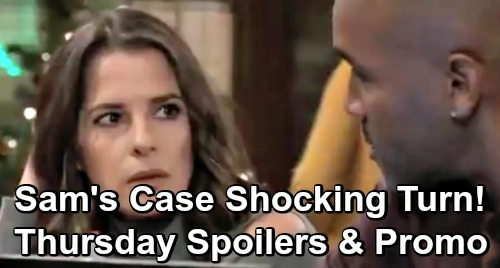 General Hospital (GH) spoilers for Thursday, December 13, tease that Sam (Kelly Monaco) and Curtis (Donnell Turner) will discuss the obituary drama. They’ll recap what they’ve learned so far and try to figure out some new details. Curtis will argue that they need to seriously rethink this case. They may stumble across something that suggests this is a far bigger deal than Sam thought.

While Sam and Curtis dive deeper into danger, Josslyn (Eden McCoy) will try to smooth things over with Cameron (William Lipton). There’s some awkwardness between them now that Joss and Oscar (Garren Stitt) are back together. Josslyn will suggest she’s glad that they can still be friends and Cam will likely agree. Unfortunately, they can’t be as close as they were before – at least not right now.

As Cameron struggles with his feelings, he’ll turn to Julian (William deVry) for advice. General Hospital spoilers say they’ll have an intriguing conversation on Thursday, so maybe Julian will have some solid words of wisdom. Over with Kim (Tamara Braun), she’ll take a step back and give Oscar some breathing room. Kim will understand that Oscar’s dealing with a lot and has to handle it in his own way.

General Hospital spoilers say Sonny (Maurice Benard) will stop by GH later. He’ll have a heartfelt discussion with Oscar and ask the sick teen to make a promise. Sonny may urge Oscar to fight this tumor with everything he’s got. He knows how much Oscar means to Josslyn, so he won’t want them to lose the love they share.

Elsewhere, Kim and Drew (Billy Miller) will do a little more bonding. After Kim confesses something, they’ll share some warm moments and grow closer. Maybe they’ll end up chatting about their past together. GH could remind Drew of the memories he could get back with that flash drive!

Other General Hospital spoilers say Maxie (Kirsten Storms) will grill Nina (Michelle Stafford) about Valentin (James Patrick Stuart). She’ll wonder what’s really going on between them, so Nina may admit she’s contemplating a reunion. Sasha (Sofia Mattsson) pushed Nina to make it happen and even called her “Mom” to seal the deal. Nina’s heart is a mushy mess now, which could work in Valentin’s favor. 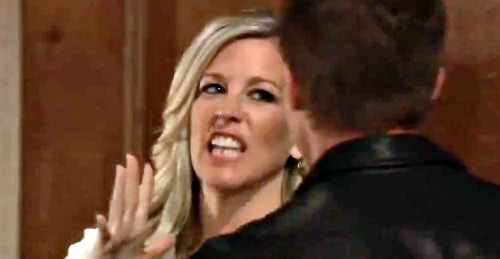 However, Valentin has to get a grip on a problem or this could all fall apart. That’s why he called Peter (Wes Ramsey) for a crucial meeting. Valentin will explain the dire situation on Thursday and beg Peter for assistance. He’ll hope Peter will help him with his Liesl Obrecht (Kathleen Gati) crisis, so Peter will realize Dr. O must have major dirt on Valentin.

Finally, Carly (Laura Wright) will hit the roof. She’ll be pacing in a total rage, so Jason (Steve Burton) will urge her to count to 10. General Hospital spoilers say Carly will refuse and let her anger explode instead. It looks like Ryan (Jon Lindstrom) or Ava (Maura West) may get on Carly’s bad side once again!

GH viewers won’t want to miss all the action ahead. We’ll give you updates as other news comes in. Stay tuned to the ABC soap and don’t forget to check CDL often for the latest General Hospital spoilers, updates and news.