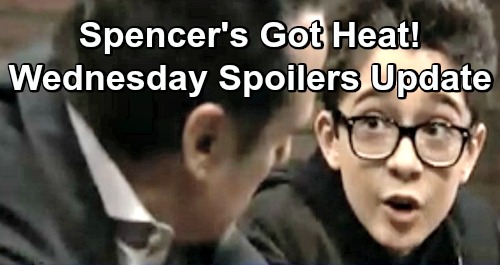 General Hospital (GH) spoilers update for Wednesday, December 12, tease that Spencer (Nicholas Bechtel) will feel the walls closing in. During a conversation with Sonny (Maurice Benard), Spencer will talk about having heat on him. Sonny will wonder what’s wrong, so we’ll see if he can pry the election tampering truth out of him. Spencer would undoubtedly like to get that off his chest!

Meanwhile, Ryan (Jon Lindstrom) will deal with Carly’s (Laura Wright) outrage. She’ll blast “Kevin” for hooking up with Ava (Maura West) and leaving Laura (Genie Francis) heartbroken. Carly will do her best to talk some sense into “Kevin,” but her efforts will be futile. Ryan’s completely infatuated with Ava and has no intention of backing off.

Other General Hospital spoilers say Ava will close herself off from the world. She’ll be busy grieving in her penthouse when a stunning visitor forces her to open up. Who will this mystery man or woman be? Could it be Dillon (Robert Palmer Watkins) or someone else with an old connection to Kiki? Will it be someone who cares mainly about Ava instead?

Regardless, Ava will likely let this person inside and perhaps get some encouragement. Over with Griffin (Matt Cohen), GH spoilers say he’ll get some encouragement, too. Finn (Michael Easton) has mourned for a lost love before, so he understands what Griffin’s going through. He’ll reach out and do whatever he can to help Griffin carry on.

Elsewhere, Maxie’s (Kirsten Storms) expression will leave Peter (Wes Ramsey) concerned. He’ll feel like something’s bothering Maxie, so he’ll want to fix it. Is this about Maxie’s struggle to put her past with Nathan (Ryan Paevey) behind her? Could it be some other issue that’s weighing on her heart? Either way, Peter will want Maxie to know he’s got her back.

Sasha (Sofia Mattsson) will also make a reunion pitch on Wednesday. She’ll urge Nina (Michelle Stafford) to get with the program and stop fighting the inevitable. Sasha will wonder why Nina’s dragging her feet on becoming a family again. She’ll think Nina should let all the drama go and be happy with Valentin as well as Charlotte (Scarlett Fernandez).

At the police station, Liesl Obrecht (Kathleen Gati) will have Valentin right where she wants him. She’ll deliver a serious ultimatum and hope that Valentin caves in. If Valentin refuses to get her out of jail, Liesl will spill the truth about Nina’s beloved “daughter.” She’ll point out that Valentin will have to say goodbye to Nina forever if that happens.