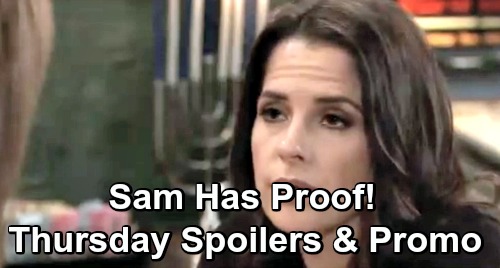 General Hospital (GH) spoilers for Thursday, December 6, tease that Willow (Katelyn MacMullen) will grow closer to Michael (Chad Duell). Chase (Josh Swickard) has been busy with all the murder mayhem, but he finally got around to asking Willow on that date he promised. Willow seems somewhat interested in the hunky detective, but Michael’s the one she’s truly drawn to right now.

After their bereavement group meeting wraps up, Willow will stop Michael on his way out. She’ll ask for his help with something, so he’ll gladly offer it. General Hospital spoilers say their bond will grow stronger, so Michael may push for a date of his own. Regardless, Chase may be fighting a losing battle!

Elsewhere, Curtis (Donnell Turner) and Jordan (Briana Nicole Henry) will spend some time in bed together. Their wedding night was derailed thanks to Kiki’s (Hayley Erin) dead body, so they’ve got some catching up to do. The newlyweds will likely talk about the killer chaos and the evidence against Griffin (Matt Cohen). Curtis may suggest that the proof seems to good to be real, so it probably isn’t.

Speaking of proof, Sam (Kelly Monaco) will have some of her own. She’ll tell Alexis (Nancy Lee Grahn) that she can prove Griffin’s innocent. Sam will reveal something that could clear Griffin’s name, so Alexis will hope to use it to her client’s advantage ASAP.

Until then, Griffin will face more questions and accusations. The PCPD is doing this by the book, so they’re really giving Griffin a hard time. To be fair, a bloody knife was found in his closet! Plus, Chase just learned that the person responsible did this with extreme precision. The murderer knew exactly how to strike so there wouldn’t be much blood.

Chase will think Griffin would’ve been knowledgeable about something like that, but the doc will insist that he’s innocent. He’ll think Chase is wasting time when he could be looking for the real murderer. While Griffin and Chase bicker, Liesl Obrecht (Kathleen Gati) will walk straight into a trap. She’ll be stunned when she’s greeted by Anna (Finola Hughes) and Finn (Michael Easton) in Cuba.

Liesl will do her best to wiggle out of this jam, but Anna and Finn may have her right where they want her. Back in Port Charles, Laura (Genie Francis) will provoke Ryan’s (Jon Lindstrom) fierce wrath. She’ll push his buttons when rants about the changes she’s seen in him. Laura just wants the old Kevin (Jon Lindstrom) back, but she can’t have him until he scores his freedom!

As for Ryan, GH spoilers say he’ll decide he’s had enough. Laura will set Ryan off with some statement he doesn’t like, so he’ll snarl a warning. This might involve Laura badmouthing Ryan’s new love, Ava (Maura West). “Kevin” will make it clear that it’ll be the last thing Laura ever says to him if she tries it again.

General Hospital fans won’t want to miss Thursday’s fun shockers. We’ll give you updates as other GH news comes in. Stay tuned to the ABC soap and don’t forget to check CDL often for the latest General Hospital spoilers, updates and news.