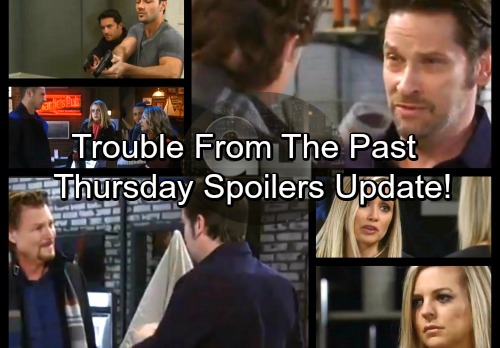 General Hospital (GH) spoilers for Thursday, January 18, tease that Molly (Haley Pullos) will face off with Julian (William deVry). He’ll try to pitch in after more landlord drama hits. Julian just wants to fulfill his promise to Alexis (Nancy Lee Grahn), but Molly will make that difficult. As TJ (Tequan Richmond) and Kiki (Haley Erin) stand beside her, Molly will shut down Julian’s attempt to help.

It appears Molly and TJ could be tossed out of their apartment, so they’ll start to get desperate. They need to rev up their efforts to stop the Charles Street development. If they don’t act fast, everyone in the area will be in a real bind.

Meanwhile, Ned (Wally Kurth) will push Alexis to assist with his campaign. She’ll let him know it’s not happening. Alexis will contend that Ned’s platform doesn’t line up with her beliefs. She’ll suggest that he should find someone else to help him out.

At GH, Liz (Rebecca Herbst) will run into Laura (Genie Francis). When Liz mentions Jim Harvey’s (Greg Evigan) recent visit, Laura will advise Liz to beware. She’ll note that money is all Jim ever has on his mind. Since Jim’s been trying to get his hands on Franco’s (Roger Howarth) art studio, Liz will worry he’s going to be a problem.

Across town, Jim will continue his little game. He’ll still want to buy the studio, but Franco will maintain that it’s not for sale. General Hospital spoilers say Jim will try another angle. He’ll bring up personal matters, which will drive Franco up the wall. Franco will contend that Jim needs to back off, but that’s not going to happen.

In fact, Jim’s just getting started. He most likely knows about Drew’s (Billy Miller) childhood incident on the stairs. Jim might’ve even caused it! However, he’ll surely let Franco believe he has major dirt on him. General Hospital spoilers state that Franco could be backed into a corner before long.

Elsewhere, Nathan (Ryan Paevey) and Dante (Dominic Zamprogna) will team up for a challenge. They’ll storm in a building to stop a scoundrel. Will this person be one of Faison’s (Anders Hove) goons? Regardless, Dante and Nathan could run into some trouble. They may be walking right into Faison’s evil trap.

Nevertheless, Maxie will be concerned about Nathan’s safety. GH fans can expect Nathan to face some dire situations before his eventual exit. We’ll give you updates as other news comes in. Stick with the ABC soap and don’t forget to check CDL often for the latest General Hospital spoilers, updates and news.