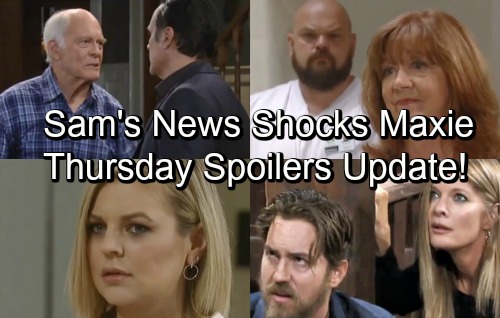 General Hospital (GH) spoilers update for Thursday, July 19, tease that Liesl’s (Kathleen Gati) vengeful plans will move forward. She doesn’t like the idea of getting caught or letting Peter (Wes Ramsey) get away with his actions. Liesl still wants justice for Nathan (Ryan Paevey), so she’s decided to burn down the stables with Peter inside.

Nina (Michelle Stafford) will try to prevent the blazing mayhem, but she won’t succeed. Liesl will ignite the flames, make a break for it and urge Nina to do the same. While Nina panics, Sam (Kelly Monaco) will seek out Maxie (Kirsten Storms). She’ll ask about Liesl and wonder when the doc was last seen. Once Maxie hears about the kidnapping suspicions, she’ll want to pitch in on the search.

Over with Valentin (James Patrick Stuart), he’ll take a look at knocked-out Franco (Roger Howarth). Before Valentin can make another move, Chase (Josh Swickard) will pull a gun on him. He’ll want Valentin’s hands where he can see them. Naturally, Valentin will explain that he stumbled across Franco. He’ll swear that he’s not Franco’s attacker, but Chase will make an arrest anyway.

At GH, Griffin (Matt Cohen) will listen to Liz’s (Rebecca Herbst) troubles. She’ll confess she she’s concerned about Franco. He was supposed to spill his story to the cops, but he never made it. Liz will realize Franco could be helping Liesl flee, but she’ll battle more serious fears as well. When it comes to Liesl, danger is always an option!

Later, Franco will regain consciousness and get a clean bill of health. He’ll be able to reassure Liz, point the finger at Obrecht and clear Valentin’s name. By the end of the week, Valentin will join a rescue crew. He’ll head over to the fiery Wyndemere stables with Lulu (Emme Rylan), Finn (Michael Easton) and Maxie.

Other General Hospital spoilers say Sonny (Maurice Benard) will console his father. Mike (Max Gail) will get agitated on Thursday, so Sonny will do his best to handle it. He could actually get some hints out of this outburst, too. Mike will talk about needing help, so he might be reliving the Croton drama. Will Mike mention a more precise location of the body and incriminating weapon?

Mike moved the evidence to the site of Charlie’s Pub, but Sonny doesn’t know where to start looking. He’d be excited about any potential clue. At Ferncliff, Carly (Laura Wright) will face Mary Pat’s (Patricia Bethune) wrath. No one can blame Mary Pat this time around! She was sedated and locked in a mental patient’s room, so her anger is justified.

Still, it isn’t fair to load Carly up with drugs she doesn’t need. It sounds like Mary Pat might call for upped dosages again, but Carly will refuse treatment. She’ll insist that it’s within her rights to do so, but Mary Pat should disagree. These fierce competitors will truly be at war from now on!