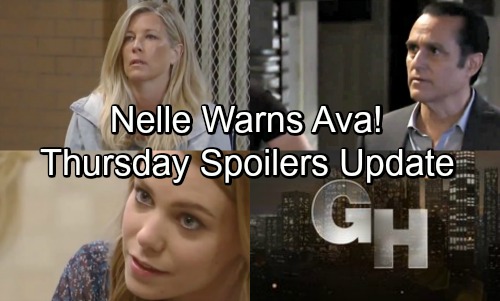 General Hospital (GH) spoilers update for Thursday, July 26, tease that Jordan (Vinessa Antoine) will grill Chase (Josh Swickard). She warned him to be extremely careful with Nelle’s (Chloe Lanier) takedown, so she’ll want to know every last detail. Chase will bring Jordan up to speed and suggest that the ball’s in Michael’s (Chad Duell) court. He’ll count on Nelle’s hubby to get the truth out of her.

Jordan will wonder if Chase thinks Michael can pull this off. Will he really be able to pry a confession out of Nelle? Chase will trust that Michael’s determined enough to make it happen. It seems they need a pattern of lethal plots. Getting an admission of guilt regarding Zach’s murder would be a huge plus.

Michael will also meet with Chase again on Thursday. He’ll insist that they’re going to put the plan in motion right now. For the sake of his child, Michael won’t want to wait any longer. Of course, Sonny (Maurice Benard) will push Michael to stay on guard. He realizes there are plenty of ways for this plot to go wrong. Some major GH bombshells are definitely looming!

Other General Hospital spoilers say Ava (Maura West) will congratulate Michael on his recent wedding. Naturally, Michael will brush her off. He doesn’t care about the marriage sham or Nelle for that matter. All Michael cares about is protecting his kid.

Ava will turn her attention to Nelle eventually. As usual, Nelle will ruffle a few feathers and make some threats. She’ll argue that like it or not, they’re in this together. Nelle will remind Ava that they’ve both got the goods on each other, so it’s best not to rock the boat.

Elsewhere, Liz (Rebecca Herbst) will stun Franco (Roger Howarth). She’ll appear when he least expects it, so he’ll ask what this is about. Liz knows that Franco and Liesl Obrecht (Kathleen Gati) are friends. He had to give a statement against her, so that must’ve been pretty difficult. Despite Dr. O’s attack, Franco still cares a great deal. Maybe Liz will just want to be there for Franco and offer support.

Back with Sonny, he’ll find Kevin (Jon Lindstrom) and give him quite a lecture. General Hospital spoilers say Sonny will be upset over Carly’s dilemma. She’s been overmedicated and stuck in a padded room. Sonny may scold Kevin for going on vacation and leaving Carly to suffer Mary Pat’s wrath.

Kevin will defend his trip to see Laura (Genie Francis), but he’ll promise to do what he can for Carly. Unfortunately, Dr. Collins’ hands may be tied. On the bright side, Jason (Steve Burton) will come to Carly’s rescue by the end of the week! We’ll give you updates as other GH news comes in. Stay tuned to the ABC soap and don’t forget to check CDL often for the latest General Hospital spoilers, updates and news.