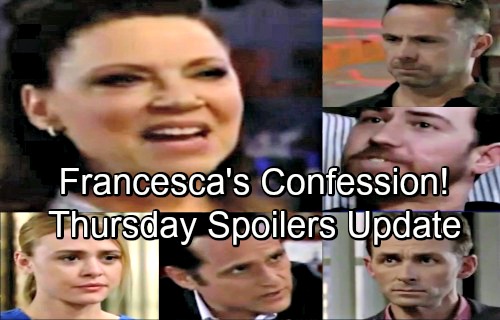 General Hospital (GH) spoilers update for Thursday, June 21, tease that Kiki (Haley Erin) will continue to fret. She’s struggling with doubts about her civil suit, but Liz (Rebecca Herbst) will try to boost her confidence. Dr. Bensch (James DePaiva) is a real creep, so there’s no way Kiki’s the first person he’s targeted. Liz will urge Kiki to hang in there and wait for someone else to come forward.

Francesca (Celesta DeAstis) will indeed confide in Kiki pretty soon. She’ll admit she was also a victim of Dr. Bensch’s sexual harassment. Will Francesca be willing to go on the record? If so, it could certainly help Kiki’s case! Meanwhile, Sonny (Maurice Benard) will hope to pry more info out of Mike (Max Gail). He’ll do whatever he can to help his father recall their Croton chat.

Sadly, it appears Mike’s memory will be completely blocked. Sonny should get more clues about the body eventually, but Mike’s mind will be blank for now. On the bright side, things are looking up for Carly (Laura Wright). She’s got both Jason (Steve Burton) and Kevin (Jon Lindstrom) in her corner, so that’s helping her stay strong. If Sonny hears positive news, he should be beyond relieved.

Too bad more Ferncliff trouble’s brewing! Next week’s new GH episodes, June 25-29, will bring the wrath of Mary Pat (Patricia Bethune), so stay tuned. Over with Kim (Tamara Braun), she’ll give Julian (William deVry) her blessing. If Julian wants to go to therapy with Alexis (Nancy Lee Grahn), Kim won’t stop him. She’ll contend that “Charlie” can make his own choices.

Alexis will think Julian owes her at least one chat with Kevin, so they’ll give this a shot. This session’s sure to bring some emotional moments. Across town, Liesl Obrecht (Kathleen Gati) will catch Anna (Finola Hughes) by surprise. After Dr. O suddenly appears, she’ll admit she’d like to settle the score. Liesl’s a bit of a bragger, so she could easily let something slip about her latest hostage.

Will Anna figure out where Peter is? Will she rush to his rescue? Peter could definitely use his mother’s assistance right now. Nina (Michelle Stafford) isn’t as harsh as Liesl, but she’s still got some rage built up. She’ll unleash more of it on Thursday and ultimately demand additional flash drive info. GH fans saw it in the lost and found box at the Metro Court, but Nina doesn’t know about that yet.

Of course, Peter doesn’t know either. He’ll feel broken and alone as Nina rips into him. Peter understands that he’s made mistakes, but his death really what Nina wants? Regardless, General Hospital spoilers state that Peter will be saved sooner or later. He just has to hang on a little longer.

Finally, Valentin (James Patrick Stuart) will face off with Finn (Michael Easton). Despite any threats that get hurled, Valentin will remain calm. He won’t be rattled by Finn’s latest mission, which probably involves seeking Peter answers. Valentin has truly spilled everything he knows, so he’ll be no help in locating Peter.

Another exciting GH episode’s in store. We’ll give you updates as other General Hospital details emerge. Stick with the ABC soap and don’t forget to check CDL often for the latest General Hospital spoilers, updates and news.