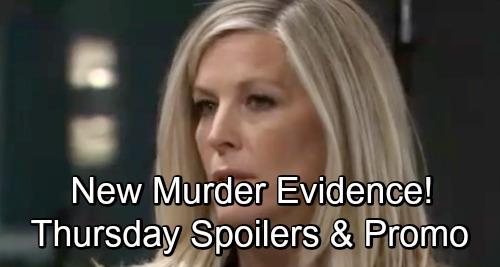 General Hospital (GH) spoilers for Thursday, November 15, tease that Finn (Michael Easton) will open up his letter from Hayden (Rebecca Budig). He’ll read most of it aloud, but he’ll keep one crucial part to himself. When Anna (Finola Hughes) realizes Finn’s holding back, she’ll push him to reveal the rest of the note. Anna won’t want any secrets between them, even if they might be painful.

Finn might be leaving out a heartfelt love declaration or something else that he feels would hurt Anna. He’ll undoubtedly assure her that Hayden is part of his past. Finn wants a future with Anna, but this just goes to show it won’t be easy. They both have baggage, quirks and family issues. They’ll have to work hard if they want their relationship to last.

Other General Hospital spoilers say Liz (Rebecca Herbst) will meet with Willow (Katelyn MacMullen). She was just summoned for another parent-teacher conference, so she’ll wonder if Willow has some answers. Charlotte (Scarlett Fernandez) was a bit of a bully to Aiden (Jason David) during career day. Willow might bring that up to Liz and hope peace can be achieved.

Perhaps Willow will want to bring Liz together with Lulu (Emme Rylan), Valentin (James Patrick Stuart) and even Nina (Michelle Stafford). There’s surely a way to settle Charlotte down and help Aiden gain some confidence. Over with Sonny (Maurice Benard), he’ll track Margaux (Elizabeth Hendrickson) down with a goal in mind. She’ll lash out as usual, but Sonny will want to find a place of harmony.

Meanwhile, Drew (Billy Miller) will have a wedding gift for Curtis (Donnell Turner). He had to back out of his best man duties, but he still values Curtis’ friendship. Fortunately, Nina’s (Michelle Stafford) filling in as Curtis’ best person. He may mention that to Drew as they throw back a couple beers and hope for a bright future. Thanks to Oscar’s (Garren Stitt) issues, Drew may not be as hopeful as Curtis.

General Hospital fans can also expect a murder investigation development. Jordan (Briana Nicole Henry) will tell Carly (Laura Wright) and Sonny about some definitive evidence. Since we know Carly will be a free woman on Thanksgiving, it sounds like it’ll be positive news – for her at least! Ryan (Jon Lindstrom), on the other hand, may not appreciate failure in any part of his plan.

Nevertheless, Ryan will do what he can to influence Jordan. He’ll manage to get close to her and steer this ship if possible. At GH, Ryan will have a chat with Franco (Roger Howarth) as well. He’ll realize Franco thinks he could make a big difference in this case.

Ryan will ask what makes Franco think he could catch the killer. Since Franco’s been in lethal shoes before, he may argue that he has a pretty good idea of what makes this murderer tick. Of course, Ryan won’t be too worried! He’ll probably just look at this as another fun challenge, so stay tuned for more drama.