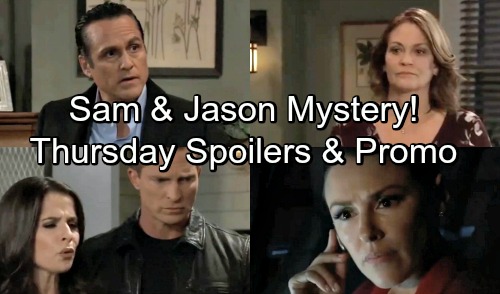 General Hospital (GH) spoilers for Thursday, November 8, tease that Curtis (Donnell Turner) will land in a sticky situation. He’s pretending he’s been sent to monitor Ferncliff’s security and he’s got the fake credentials to prove it. However, a staff member will seem suspicious soon enough. When she catches Curtis texting, she’ll wonder who he’s sending messages to and why.

Elsewhere, Sam (Kelly Monaco) and Jason (Steve Burton) will grill the patient they just found. Based on their demeanor, it’s clear that it’s not drugged up Kevin (Jon Lindstrom). It’s too early for that discovery anyway! Jason and Sam will seem annoyed by the person they speak to. Sam will ask who fooled him or her into thinking this was a way out.

We know Nelle will be back in Thursday’s new GH episode, so she seems like a good fit here. Perhaps Nelle faked some sort of crazy attack and scored herself a transfer. She might’ve thought life at Ferncliff would be better than Pentonville. The security at this mental institution obviously leaves a bit to be desired, so that may have been a factor, too. Nelle may hoping to escape at some point.

Meanwhile, Jordan (Briana Nicole Henry) will stop by Liz (Rebecca Herbst) and Franco’s (Roger Howarth) place. Liz will wonder what brings Jordan by, but Franco will think he knows. He’ll suggest Jordan is there to talk to Franco the killer. Now that a vicious murderer’s on the loose, Jordan may want to pick Franco’s brain a bit. Unfortunately, he’s got experience in this department!

Other General Hospital spoilers say Josslyn (Eden McCoy) will be on edge. It won’t take Cameron (William Lipton) long to notice her strange behavior. Cam will wonder why Joss is in such a rush. He’ll feel like she’s desperate to get away from her mom, so this may be about their growing bond.

Carly’s (Laura Wright) glad that Joss is smiling again, but she doesn’t want Cameron exploiting the situation. Of course, Liz has concerns as well. She’ll grill Cameron about his motives on Thursday, but he’ll probably reiterate that he’s just being a friend. The teens want to keep their parents in the dark on the plan for now.

Over with Oscar (Garren Stitt), he’ll get fed up with Kim (Tamara Braun). She’ll reach out again and try to talk him out of this emancipation case. Kim will beg Oscar to back off the idea and get the clinical trial he needs. However, Oscar will stand his ground. He’ll insist that he’s moving forward with this lawsuit and there’s nothing Kim can do about it.

At Jeanette’s (Ely Pouget) house, Sonny (Maurice Benard) will demand answers about Vincent’s murder. He’ll want to know why Jeanette’s husband was killed, but how much will she be willing to offer? Sonny will hope it’s enough to convince Margaux (Elizabeth Hendrickson) of her mom’s guilt.

GH spoilers say Margaux will listen in on this shocking conversation. Sonny will be wearing a wire, so Margaux will hear everything he hears. Jeanette may not admit she ordered the hit, but it looks like she’ll still raise Margaux’s suspicions.

General Hospital fans won’t want to miss all the excitement on Thursday We’ll give you updates as other GH news comes in. Stay tuned to the ABC soap and don’t forget to check CDL often for the latest General Hospital spoilers, updates and news.