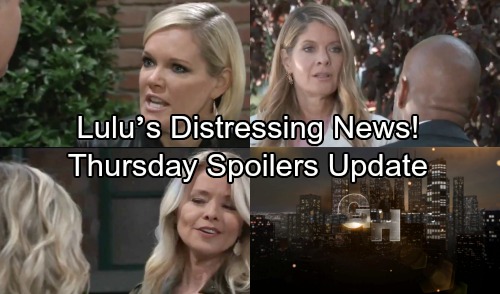 General Hospital (GH) spoilers for Thursday, October 11, tease that Maxie (Kirsten Storms) will get a bit defensive. During a chat with Felicia (Kristina Wagner), it looks like Peter’s (Wes Ramsey) name will come up. Maxie may explain that they had a long talk and are getting back on track. She’ll view Peter as a pal, but Felicia won’t think her daughter should be so sure of that.

Maxie will defend her friendship and try to help Felicia understand. Since Peter’s remorseful, Maxie won’t see why she shouldn’t show him compassion. Felicia will just want Maxie to be careful, especially since friends become lovers so easily on soaps.

Over with Nina (Michelle Stafford), she’ll get grilled by Curtis (Donnell Turner). General Hospital spoilers say he’ll help Nina prep for her daughter meeting. She’s seeing Sasha (Sofia Mattsson) for the first time, so she’ll definitely have a lot on her mind. Curtis will ask what Nina wants out of this initial interaction. He may suggest that it’s fine to be hopeful, but she shouldn’t go overboard.

Sasha isn’t happy about suddenly having a new birth mother. Curtis will fear that Nina’s going to get her heart broken, which is exactly what’ll happen soon enough. Sasha’s looming rejection will certainly sting! In the meantime, Laura (Genie Francis) will also find herself feeling rejected. As “Kevin” continues to keep her at a distance, Laura will finally seek some answers.

Ryan (Jon Lindstrom) has been feigning illness as an excuse to steer clear of Laura. She’ll realize something’s up, so she’ll mention that he’s avoiding her. Ryan might blame their marriage issues on Laura’s extended trip. He could contend that having her home will be an adjustment for both of them. That might buy Ryan a little more time, but he’ll have to think of a better solution sooner or later.

Other General Hospital spoilers say Lulu (Emme Rylan) will feel dejected. It appears she’ll have some sort of outburst over the phone. That’ll bring sadness afterward, so Lulu may get rotten news from Dante (Dominic Zamprogna). Perhaps he’ll reach out about his mission and confess there’s no end in sight.

Lulu will be distraught as she turns around. She’ll hope the person behind her didn’t have to hear all the drama. Peter seems like the most likely option, but we can’t rule out Chase (Josh Swickard) either. GH buzz hints that Chase may be Lulu’s next love interest, so they’ll have to develop that relationship in the coming weeks.

At the Metro Court, Margaux (Elizabeth Hendrickson) will face Drew’s (Billy Miller) fury. She just admitted she has the flash drive, but Drew might have doubts at first. When Margaux insists that it’s in her possession, Drew will snap over her sick games. He’ll think she’s messing with his life, but she’ll only have Sonny’s (Maurice Benard) takedown on her mind.

Across town, Griffin (Matt Cohen) and Kiki (Hayley Erin) will consider the future. They’ll be pleased that nothing’s holding them back as a couple. Elsewhere, Ava (Maura West) will get huffy with Scott (Kin Shriner). She’ll feel like he’s in Kiki’s corner, so she’ll point out that she’s the one who got hurt here.