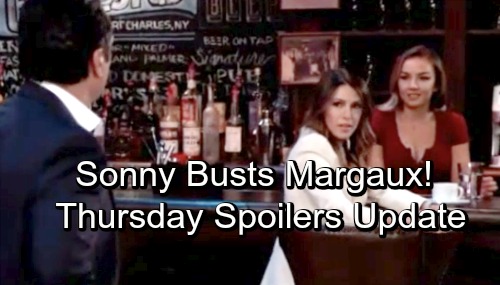 General Hospital (GH) spoilers update for Thursday, October 25, tease that Nina (Michelle Stafford) will take a risk. When she first met Sasha (Sofia Mattsson), Nina came on a bit too strong. She nearly drove her daughter away for good, but Valentin (James Patrick Stuart) pitched in and changed Sasha’s mind.

Now that Nina’s spent a little more time with Sasha, she’ll feel comfortable enough to be bold again. Nina will urge Sasha to at least think about moving to Port Charles. She’ll be nice about it and suggest that there’s no pressure, so Sasha shouldn’t be too overwhelmed.

However, Sasha may not be on board right away. That’d be a huge deal for her, so she’ll have to think about it before she uproots her whole life. Meanwhile, Anna (Finola Hughes) will surprise Finn (Michael Easton) with some bedroom fun. They’ll share some sexy moments and keep the spice in their growing relationship.

Speaking of Margaux, she’ll try to get closer to Kristina (Lexi Ainsworth). At Charlie’s Pub, Margaux will order a drink and make some small talk. She’ll probably hope she can slip Sonny (Maurice Benard) into the conversation and find some new angle.

Kristina will be oblivious at first, but it won’t be long until Sonny stops by and explains. When he walks through the door and sees Margaux, he’ll tell Kristina she’s the new DA. Sonny will note that Margaux’s out for vengeance, so he’ll want Kristina to be careful about what she spills.

Kristina will also provide some tips in Thursday’s GH episode. Oscar (Garren Stitt) took a job as a bus boy, so he’ll require assistance. Kristina will keep Oscar from getting in over his head on day one. She’s felt pretty pathetic lately, so helping someone in need could be a real confidence booster.

General Hospital spoilers hint that Alexis will stand her ground for now. It looks like Kim and Drew (Billy Miller) will need another solution, so let’s hope they can find one before it’s too late. We’ll keep you posted as other GH news comes in. Stick with ABC soap and don’t forget to check CDL often General Hospital spoilers, updates and news.