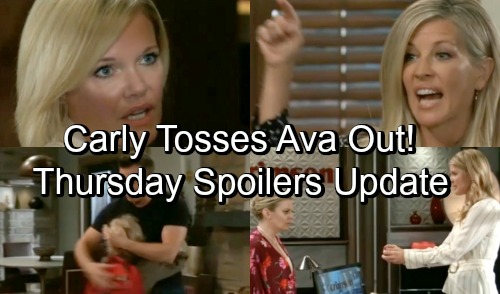 General Hospital (GH) spoilers for Thursday, October 4, tease that Nina (Michelle Stafford) will stun Maxie (Kirsten Storms) with Sasha (Sofia Mattson) news. She just revealed that she has a daughter, which left Maxie looking confused and skeptical. Nina will do her best to convince Maxie during their next chat. She’ll bring up the DNA proof and show off Sasha’s lovely picture.

Maxie will worry since Valentin’s (James Patrick Stuart) involved in all this, but Nina won’t think Curtis (Donnell Turner) would steer her astray. Nevertheless, Maxie will just want Nina to be careful here. She knows how much Nina wants to be a mom, so it’s important to stay on guard and protect her heart.

At GH, Finn (Michael Easton) will examine Gregory (James Read) and offer some updates on his case. He may now have any solid answers yet, but General Hospital spoilers say he’s working on it. Gregory will tell Chase (Josh Swickard) that he’s in good hands. He’ll argue that the only thing Finn hates more than him is failure, so Finn’s the perfect doc to tackle this challenge.

Meanwhile, Griffin (Matt Cohen) will bump into Peter (Wes Ramsey). They’ll rehash the past and most likely discuss Anna (Finola Hughes). Griffin may be pleased to hear that Peter’s softening toward his mom a bit. He’s certainly not a big Peter fan, but he can understand that the guy’s been through a lot. Peter’s upbringing was a nightmare, so it’s easy to see how he got so far off track.

Griffin will wonder if Peter ever found any peace, but the weary publisher will admit that he hasn’t. He still needs to right some wrongs, including the mistakes he made with Maxie. Peter will hopefully get the chance soon enough. In Kevin’s (Jon Lindstrom) office, Felicia (Kristina Wagner) will unknowingly talk to Ryan (Jon Lindstrom). She’ll want to discuss – you guessed it – Ryan Chamberlain.

The Invader’s moving forward with their crime spree anniversary edition, so Felicia will hope they can use this as an opportunity. She’ll argue that they can finally tell the gruesome truth about Ryan, so “Kevin” should insist she’s right about that! Over with Jason (Steve Burton), he’ll enjoy a sweet visit with Danny (T.K. Weaver). Sam will hang out with them as well, so we’ll get some “JaSam” family time.

Finally, Ava (Maura West) and Carly (Laura Wright) will face off. They might end up sparring over Ava’s attempt to keep Kiki (Hayley Erin) from Avery (Ava and Grace Scarola). Carly won’t think it’s fair to cut Kiki out. She may also push for more Sonny and Avery visits, but Ava won’t be interested. Why should she cater to the Corinthos clan’s wants and needs?

Ava will suggest that they’re even, but Carly will snap that she should get out of her house. Of course, Ava will gladly do it. She’ll just make sure to hurl another insult or two as she leaves! We’ll keep you posted as other General Hospital details emerge. Stick with ABC’s GH and don’t forget to check CDL often for the latest General Hospital spoilers, updates and news.