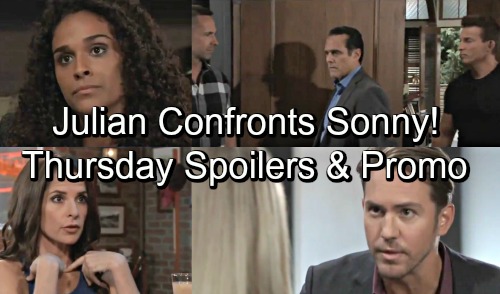 General Hospital (GH) spoilers for Thursday, September 13, tease that Jason (Steve Burton) will join Sonny (Maurice Benard) and Julian’s (William deVry) chat. Things will be tense thanks to that body in the basement. Julian now knows why Sonny was so obsessed with buying the place. He should be willing to keep quiet, but he’ll naturally want some favors in return.

Meanwhile, Margaux (Elizabeth Hendrickson) will get updates on the explosion. She’ll hear about the corpse that was found and ask if a gun was recovered as well. We should note that Briana Nicole Henry will make her debut as Jordan on Thursday’s new GH episode, September 13. She’ll work with Margaux to sort out the facts of the case and hopefully make some headway.

Other General Hospital spoilers say Sam (Kelly Monaco) will be in big sister mode. When Kristina (Lexi Ainsworth) comes to her with a problem, Sam will wonder if she’s asking for advice. Kristina will admit that she’s just scared. She may fill Sam in on Mike’s (Max Gail) struggles and potentially even the evidence she lied about. Kristina should be worried about what Sonny’s gotten himself into.

Over with Maxie (Kristen Storms), she’ll talk to Robin (Kimberly McCullough) about Peter (Wes Ramsey). Maxie may admit that she’s still feels something for him. She considered Peter a close friend, so it’s been hard to completely cut herself off. Maxie will wonder where Peter fits in Robin’s life. Now that Robin knows Peter’s her half-brother, will there be a spot for him?

Since Peter isn’t even open to connecting with Anna (Finola Hughes), Robin probably won’t think she has to fret about it. Peter is Faison’s (Anders Hove) son, so all this is tough for Robin anyway. Nevertheless, General Hospital spoilers hint that this family could come together down the road.

Until then, Peter will remain hard at work. He’s doing his best to take The Invader in a new direction, but he needs the help of top-notch journalists like Lulu (Emme Rylan). Peter will offer Lulu a major assignment in Thursday’s episode. He’ll suggest that she should cover the anniversary of the Ryan Chamberlain (Jon Lindstrom) killings.

Lulu wasn’t planning on it since Ryan hurt people she cares about. However, she’ll definitely be tempted to take this shot. As Lulu’s eyes widen, Peter will wonder if she wants the story or not. While Lulu mulls that over, Ryan will put on a show at GH. He’ll be impressed by his ability to turn on the waterworks when needed and make everyone think he’s caring Kevin (Jon Lindstrom).