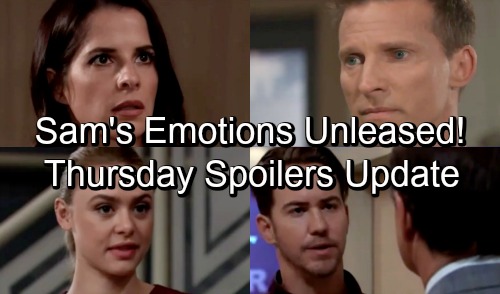 General Hospital (GH) spoilers for Thursday, September 27, tease that Peter (Wes Ramsey) will have a lot on his mind. He wants to make things up to Maxie (Kirsten Storms) and find a way to restore their friendship. Peter would probably even be on board with a deeper relationship. However, he doesn’t want to prey on Maxie when she’s vulnerable or press his luck.

Since Peter’s torn, he could really use some guidance. He’ll spot “Kevin” (Jon Lindstrom) in Thursday’s episode and wonder if they can chat for a few minutes. Of course, Peter will actually unload his problems to Ryan (Jon Lindstrom). That sounds like a recipe for disaster!

Elsewhere, Lucy (Lynn Herring) will put together a small gathering. She’ll tell Mac (John J. York) that she just wanted to spend time with some old friends. Lucy will likely admit she invited Kevin to attend. Again, GH viewers know this is Ryan! If he shows up, he’ll undoubtedly make a few waves.

Other General Hospital spoilers say Lulu (Emme Rylan) will express gratitude. Someone will arrive to meet her on Thursday, so Lulu will be thankful for the chance to explain. Maybe Lulu will give Felicia (Kristina Wagner) updates on her latest assignment, which is the Ryan Chamberlain story. She knows this is a sensitive subject, so she’ll promise to handle it with care.

Across town, Ava (Maura West) will have a brief moment of joy. She’s been livid lately, so she should enjoy tossing back some drinks and chilling out with Franco (Roger Howarth). He’ll toast to happy endings, so something must be going right.

Perhaps Ava will argue that she’s going to live her own life and let Kiki live hers. She could suggest that pushing Kiki out of the picture is for the best. Franco may be feeling a bit more hopeful about his own family. He’s been facing some tension with Cameron (William Lipton), but at least his relationship with Liz (Rebecca Herbst) is going well. They’ve stopped keeping secrets, so that’s real progress.

As for Ava, she’ll inevitably stir up trouble. Ava may suggest that she can leave Kiki alone, but we all know she can’t! More revenge drama should be coming up eventually. For now, Kiki and Griffin (Matt Cohen) will deal with something else. Maxie will find them together and deliver a stunning proposal. She’ll have an idea that should catch Griffin and Kiki off guard as well as bring them closer.

Over with Finn (Michael Easton) and Anna (Finola Hughes), they’ll get news regarding Liesl Obrecht’s (Kathleen Gati) whereabouts. Chase (Josh Swickard) will reveal that the WSB has a new lead. With any luck, they’ll be closing in on Dr. O pretty soon.

GH fans can also expect warm moments for Jason (Steve Burton) and Sam (Kelly Monaco). After Jason recaps his discussion with Oscar (Garren Stitt), Sam will be free to unleash her emotions. She’s struggling to watch Drew (Billy Miller) cope with so much pain.

Sam herself is upset by Oscar’s terrible diagnosis, too. She wishes the teen could stick around to bond with his little sister, Scout. In the midst of all the sadness, Jason and Sam will connect. They’ll exchange some hot “JaSam” looks, so it’s possible they’ll rev up the romance!

General Hospital has some gripping scenes in store. We’ll keep you posted as other GH details comes in. Stay tuned to the ABC soap and don’t forget to check CDL often for the latest General Hospital spoilers, updates and news.