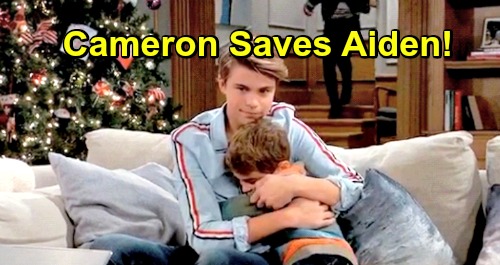 General Hospital (GH) spoilers tease that Cameron (William Lipton) will continue to be there for his brother. He knows Aiden’s (Jason David) going through a rough time, so he really wants to help. Laura (Genie Francis) pointed out how much Aiden looks up to his big bro. She thought it’d be great if Cameron could remind Aiden of how awesome he is and that’s exactly what Cam did in Friday’s episode.

Many GH fans are praising the show for this sweet moment of family bonding. It’s nice to see Cameron mature a bit, too. He’s come a long way from stealing headphones for kicks. Cam recently got busted over that pot deal, but he was just trying to help sick Oscar (Garren Stitt). At least his heart was in the right place!

General Hospital spoilers suggest that Aiden’s troubles aren’t over yet. Charlotte (Scarlett Fernandez) apologized and agreed to back off, but what about his other hateful classmates? They could easily target Aiden as well, so the poor kid asked Cameron how to get people to like you.

Aiden’s spirits were lifted when Cam mentioned his cool skills and qualities, but we have to remember they’re on holiday break. While school’s out, Aiden can live in his happy family bubble where they all love and support him. Sadly, his world could come crashing down again once school’s back in session.

Willow’s (Katelyn MacMullen) hands are somewhat tied thanks to strict school policies. It seems like those policies need to be changed! They clearly cater more to the bully than the victim. General Hospital spoilers hint that Aiden’s suffering will rev up, so this storyline could take a dark turn.

A suicide attempt or even contemplation would spark a ton of backlash, so the show may not want to go there. However, we have to consider the idea that this could be an extreme warning about bullying. Sometimes younger bullying is actually the most dangerous. Kids that age can’t fully grasp the consequences of drastic actions.

If GH decides to steer clear of the risk, they could make the bullying turn violent. Aiden’s a small kid and would be quite vulnerable against the bigger bullies in his class. Now that Charlotte’s stepping down as ringleader, there’ll undoubtedly be someone else waiting in the wings. The new leader of the pack could be even worse.

General Hospital may stick with the helpful Cameron theme and have him come to Aiden’s rescue. He could be the hero that manages to shut all this down – or save Aiden’s life it comes to that.

It sounds like some gripping drama’s ahead, so we’ll give you updates as other GH news comes in. Stay tuned to the ABC soap and don’t forget to check CDL often for the latest General Hospital spoilers, updates and news.