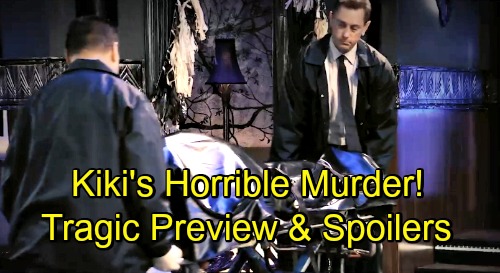 General Hospital’s new tragic promo video teases that Kiki’s (Hayley Erin) murder will send shockwaves through Port Charles and change the town forever. First, Curtis (Donnell Turner) and Jordan (Briana Nicole Henry) are shown slowly realizing that the woman who appears to be asleep in their bed is actually deceased. Jordan will immediately determine that they’re dealing with a homicide, and she’ll call the murder in.

Of course, the newlyweds will be shocked to discover exactly who it is that has been murdered…Kiki Jerome, one of the invitees to their wedding. They’ll be horrified, and it looks like word will quickly spread amongst those attending the wedding reception that something horrible has happened.

According to GH spoilers, Griffin (Matt Cohen) will be called upon by Jordan to offer his expertise at the scene. This may be before Jordan knows exactly who has been murdered, or perhaps she’ll need to chat with Griffin since he was the last person to see Kiki alive and well. Griffin is shown in the promo crying and looking truly devastated.

It looks like word will spread fast throughout Port Charles about the murder as well. Sasha (Sofia Mattsson) is shown looking horrified, as she says, “I honestly feel sick right now.” And Franco (Roger Howarth) is shown getting the news of Kiki’s murder, in unbearable pain.

And while all of this is unfolding, Kiki’s killer Ryan (Jon Lindstrom) will be quietly celebrating his kill with Ava (Maura West) at Ava’s penthouse. The two headed back to Ava’s place after their run-in with Laura (Genie Francis) for a private Thanksgiving celebration. The two are shown in bed together, which likely means that Ava won’t find out about Kiki’s murder for a while.

But the promo indicates that Ava will eventually learn about her daughter’s brutal death, as her voice can be heard crying, “Noooo!” Ava is going to be very disturbed by the turn of events. It will be devastating for her to think of how Kiki spent her final moments, plus how Ava spent her final moments with Kiki.

It sounds like we’re in for some sad scenes in the coming days, as Port Charles learns about its next murder. Be sure to stay tuned for all the drama. We’ll give you updates as other news comes in. Stay tuned to the ABC soap and don’t forget to check CDL often for the latest General Hospital spoilers, updates, and news.