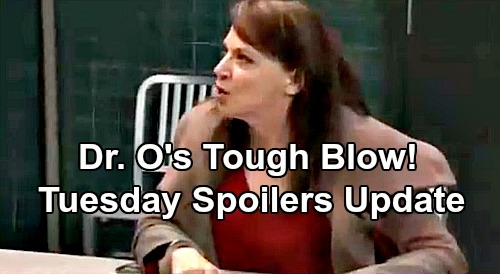 While things get heated in the cemetery, Chase (Josh Swickard) will make another play for Willow’s (Katelyn MacMullen) heart. He’ll try to buy his latest obsession a drink, but this could turn into a dating mishap. Chase isn’t exactly the best at flirting, so his intentions may be misinterpreted. GH spoilers point to some confusion on Tuesday, which means Chase may feel in over his head soon.

Over with Sasha (Sofia Mattsson) and Valentin (James Patrick Stuart), they’ll debate the Nina (Michelle Stafford) situation. Valentin roped Sasha into being Nina’s fake daughter, so the truth could definitely hurt his love. Nina will wander over as the topic comes up, but she won’t be sure what’s going on. She’ll want to figure out how the two of them would cause harm.

Valentin and Sasha will look guilty, but they’ll keep their plot under wraps for now. Instead, Sasha may indicate that she still wants to leave Port Charles. Valentin could insist that he’s been trying to talk Sasha out of it, but they’ll both hurt Nina if he fails.

General Hospital spoilers say Nina will be bummed on Tuesday, so Sasha might actually take off briefly. Of course, Sasha could change her mind later or even be summoned again by Valentin. One way or another, Sasha has to be in town for the daughter scheme fallout. There’s no way GH can leave Sasha out of the big blowup that’s brewing.

In the meantime, Ryan (Jon Lindstrom) will feel like he’s on top of the world. He’s pleased to see so many Port Charles residents suffering because of his actions. Ryan will tell someone he’s found his true calling and he certainly seems to believe that. This villain apparently thinks he was born to murder and cause destruction, so his dark desires should grow stronger.

Laura (Genie Francis) will remain frustrated in Tuesday’s episode. She believes “Kevin” is going through a crisis and she thinks she knows what brought it on. Laura suspects that the anniversary of Ryan’s killings may be to blame. She feels like “Kevin” lost control of his life when the topic resurfaced and he tried to bury the pain.

It appears Laura will mention all that to Sonny (Maurice Benard) and get his perspective. She’ll state that Ryan has claimed another victim after 25 years. Laura will hate that her marriage became a casualty of Ryan’s deadly drama, but she has no clue how true that really is!

Finally, Liesl Obrecht (Kathleen Gati) will kick herself for not trusting her gut. She knew Finn (Michael Easton) and Anna (Finola Hughes) were likely duping her, but she couldn’t risk letting Britt (Kelly Thiebaud) die. Once Liesl finds herself at the police station, she’ll push Anna and Finn to take her to GH. That’s when they’ll reveal that Dr. O was right. Britt’s life isn’t in danger (unless Dr. O kills her!) and the jig is up!