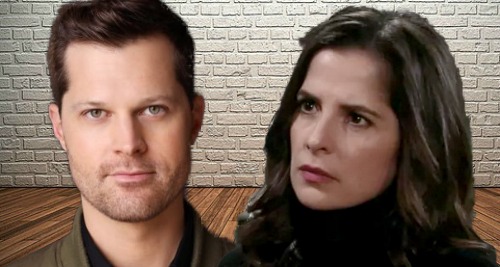 General Hospital (GH) spoilers tease that another key player could be entering an exciting storyline. Technically, two hot plots are merging into one thanks to the recent Daisy (Kelsey Wang) twist. She’s been pulling Kristina (Lexi Ainsworth) into a dangerous cult and now she’s tied to Sam’s (Kelly Monaco) obituary drama, too.

Sam’s husband, Leland Powell, may have had some cult connections. If not, perhaps someone in his family got mixed up in this movement later. Since GH is gearing up for some stunning cult revelations, there must be a leader behind all this. Daisy is more of a recruiter, but there may be some middlemen as well.

That brings us to some intriguing casting news. According to published reports John Patrick Jordan has joined GH as Peyton Mills and is set to make his debut pretty soon. Peyton should hit the air just after Christmas, so this is a good time to start speculating. General Hospital’s latest mystery is bound to heat up as we enter the new year.

The show’s keeping a tight lid on the details surrounding Peyton and who he’ll be interacting with. However, he’s got the right look for someone within this cult. Whether Peyton’s the head honcho or some sort of go-between, he’s probably trouble. Peyton may be one of those guys who can seem trustworthy on the surface, but has a creepy side underneath.

It’s easy to imagine Daisy introducing Kristina to Peyton. He’d undoubtedly welcome her to DOD with open arms and try to yank her in this mess even further. General Hospital spoilers say Kristina and Sam will do some clashing down the road. Sam might wise up and realize what Kristina’s gotten herself into. She wouldn’t want to see her sister brainwashed by some nutjobs.

This could lead Sam to take a stand for Kristina, which may be the whole point of drawing Kristina in. Maybe this cult leader wants Sam to get involved for a serious takedown. She could end up walking straight into a trap eventually, so peril could be brewing for Sam and those closest to her!