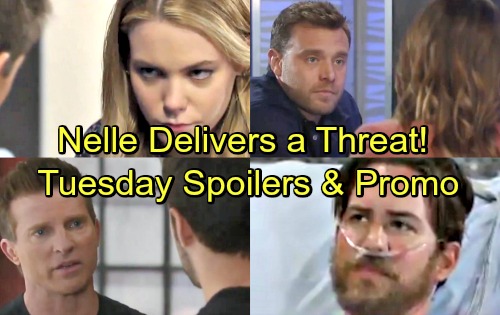 General Hospital (GH) spoilers for Tuesday, July 24, tease that Ava (Maura West) will stir up suspicions for Griffin (Matt Cohen). She’ll keep changing the subject during their chat, so Griffin will eventually call her out on it. He’ll wonder what’s going on, but Ava probably won’t be completely honest.

If Griffin wants to talk about Carly’s (Laura Wright) drama, that’s obviously a topic Ava would rather avoid. She’s frenemies with Nelle (Chloe Lanier), so she clearly knows too much. Ava might also shy away from discussing Kiki’s (Haley Erin) case. She’s had more time to mull over that pic of Kiki and Griffin, so she may have growing fears.

Regardless, Griffin will try to pry some answers out of Ava. He’ll hope to fix whatever’s wrong, but it’s not that easy! Meanwhile, Kiki will have another meeting with Alexis (Nancy Lee Grahn). She’ll ask about her chances of winning this case, but Alexis won’t be certain. It’s good that Francesca’s (Celesta DeAstis) backing Kiki up, but there’s still no hard evidence against Dr. Bensch (James DePaiva).

At GH, General Hospital spoilers say Nina (Michelle Stafford) will grill Peter (Wes Ramsey). She’ll want to know why he didn’t blab to the cops. Peter pinned everything on Liesl (Kathleen Gati), so Nina won’t understand why he kept her own name out of it.

Of course, Nina showed Peter some kindness while he was held captive. She also wanted to save him in the end, so that meant something to him. Elsewhere, Margaux (Elizabeth Hendrickson) will run into Drew (Billy Miller). She might mention the empty envelope she found with his name on it. Could this revive some interest in the flash drive hunt?

It looks like Drew may recap a bit of his story, so Margaux will have a ton of questions. However, she’ll insist that they’ll have to wait. Margaux will probably have to tackle all the Peter chaos at work. Over with Michael (Chad Duell) and Nelle (Chloe Lanier), they’ll have a tense conversation. Nelle will suggest that if Michael doesn’t give her what she needs, she’ll have to do something about it.

Michael will urge Nelle to elaborate, but she’ll undoubtedly shift gears instead. She won’t want Michael to suspect her deadly plans. In the boxing gym, Jason (Steve Burton) will express concern to Chase (Josh Swickard). He’ll argue that bringing down Nelle won’t matter if it costs Michael his life.

General Hospital spoilers say Chase will push Jason to trust him. He’ll think he’s got everything covered, but perhaps he shouldn’t be so sure! Nelle has a few tricks up her sleeve that could catch everyone off guard. We’ll give you updates as other GH news comes in. Stay tuned to the ABC soap and don’t forget to check CDL often for the latest General Hospital spoilers, updates and news.</p