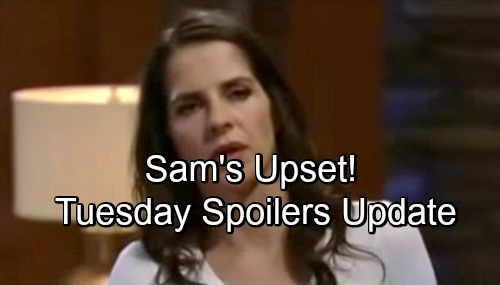 General Hospital (GH) spoilers update for Tuesday, June 5, tease that Sam (Kelly Monaco) will make a startling discovery. Valentin (James Patrick Stuart) recently turned to Alexis (Nancy Lee Grahn) for help with a trust for Charlotte (Scarlett Fernandez). Since Alexis had been looking through a box of mementos, Valentin suggested he could fill her in on some history regarding Mikkos (John Colicos).

Alexis was hesitant initially, but she may be all in on Tuesday’s new GH episode. Regardless, Alexis will be teaming up with Valentin one way or another. General Hospital spoilers say Sam will object to the risks, but Alexis will undoubtedly reassure her daughter. She’ll think Valentin could prove useful, so she’ll be willing to put up with any drama that’s looming.

Across town, Sonny (Maurice Benard) will get a visit from Jason (Steve Burton). They’ll talk about Carly’s (Laura Wright) jam and the lack of progress in getting her out of it. Jason will insist that he needs more time. He just hasn’t been able to prove that Nelle (Chloe Lanier) set Carly up, but he’s not about to throw in the towel. Even if Jason’s help comes too late, he’ll hope to save the day eventually.

Other General Hospital spoilers say Kim (Tamara Braun) will pop in Drew’s (Billy Miller) office. He may mention that Oscar (Garren Stitt) just dropped by, too. Drew was able to give his son some valuable advice. He also promised to attend an event at Oscar’s school and hook him up with an Aurora internship. Of course, Drew won’t be able to keep sweet promises like these if he’s dead.

That’ll be on Drew’s mind as he mulls over what’s next. Will Kim still be against the memory procedure or will she have a change of heart? Kim might admit that Drew deserves to be a little selfish here. At the same time, Kim will certainly hope Drew’s around for a future with his kids.

Elsewhere, Lulu (Emme Rylan) will be stunned to learn Jordan’s (Vinessa Antoine) in trouble. GH spoilers state that Dante (Dominic Zamprogna) will explain some issues at the PCPD. It seems Jordan’s in danger of losing the police commissioner position. The fact that Peter escaped obviously looks bad for the whole department. Making a change in leadership would send a strong message.

For now, Jordan will concentrate on handling Stella (Vernee Watson). During a night out at The Floating Rib, Curtis (Donnell Turner) and Jordan will likely bump into his problematic auntie. General Hospital spoilers say Jordan will want to deal with the conflict before it spirals out of control.

Unfortunately, getting through to stubborn Stella won’t be easy! Felix (Marc Anthony Samuel) will sense that Stella’s upset about Jordan and Curtis’ engagement. When he mentions it, Stella will try to shut down the conversation. Nevertheless, Felix might offer some advice and put Stella on the path to acceptance.

GH fans won’t want to miss Tuesday’s entertaining episode. We’ll give you updates as other news comes in. Stay tuned to the ABC soap and don’t forget to check CDL often for the latest General Hospital spoilers, updates and news.