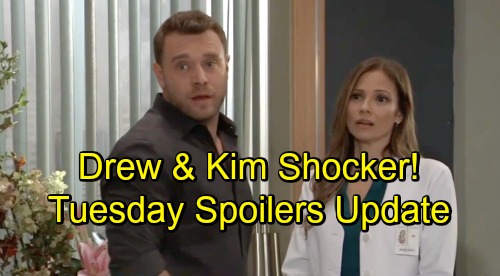 General Hospital (GH) spoilers for Tuesday, November 13, tease that Margaux (Elizabeth Hendrickson) will awaken with a hangover and plenty of confusion. She’ll see that Sonny (Maurice Benard) spent the night right next to her, so she won’t get what his game is. Margaux certainly hasn’t been nice to Sonny so far and he hasn’t been nice to her either. She’ll question the sudden change.

Sonny saw how much pain Margaux was in after the truth came out. She was a mess on the floor with those letters. Now that Sonny’s had that crazy nightmare, he should be even more sympathetic. Sonny sees how closely the past can connect to the present and future. He may express some regret to Margaux and hope things can continue to mellow between them.

Meanwhile, Carly (Laura Wright) will be a nervous wreck. She’ll give Jason (Steve Burton) updates on Sonny’s night away from the house and wonder what’s going on. Carly will fear the worst, but Jason will give her a pep talk. He’ll let Carly know that everything’s going to be OK and fortunately, it will be. Sonny will head home to reunite with Carly before you know it, so that should ease her mind.

Other General Hospital spoilers say Jordan (Briana Nicole Henry) and Curtis (Donnell Turner) will mull over their nuptials. Their big day is coming up fast, so they’ll try to lock in the last details. Let’s hope their wedding plans pan out!

At some point, Curtis will grill Jordan about Mary Pat’s (Patricia Bethune) murder. He’ll ask if Carly is still being looked at, so Jordan may admit that’s the case. However, she might add that they’re really focusing on a more menacing option. They don’t have their top suspect nailed down yet, but they can tell it was someone conniving and heartless.

Until the PCPD can figure it out, Ryan (Jon Lindstrom) will remain on the loose in Port Charles. He should strike another PC resident eventually, so stay tuned for that chaos. At GH, Drew (Billy Miller) and Kim’s (Tamara Braun) conversation will be interrupted. Monica (Leslie Charleson) will barge in and learn about Oscar’s (Garren Stitt) emancipation lawsuit, so she’ll want to know how she can help.

Over with Julian (William deVry), he’ll also want to be helpful in some way. Julian can’t stand the idea of Kim being in pain, so he’ll keep tabs on Alexis (Nancy Lee Grahn) and Oscar’s chat. He’ll be observing and listening for anything that might give him a new strategy. The sooner Oscar drops this lawsuit, the better. He needs to sign up for that clinical trial before it’s too late.

As for Oscar, he’ll promise he’s prepared for what’s ahead. Alexis will have her doubts, but Oscar will keep up his efforts to secure freedom from his parents. Across town, Josslyn (Eden McCoy) and Cameron (William Lipton) will strengthen their connection. This fake boyfriend scheme seems to be heading into teen love territory. It probably won’t be long until this becomes a real romance.