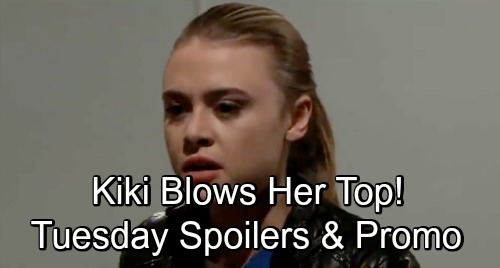 General Hospital (GH) spoilers for Tuesday, November 20, tease that Marcus (Nigel Gibbs) will dig a little deeper with Stella (Vernee Watson). It’s clear that there’s a strong connection between them, but Marcus seems to be happily married. He mentioned coming to Port Charles for his wife’s treatment at GH.

Of course, we can’t ignore the possibility that Marcus’ wife is actually quite ill and will die down the road. For now, Stella and Marcus will reflect on the past. General Hospital spoilers say Marcus will share some of his regrets. One of his biggest will be about how much time he wasted. Marcus certainly has lingering feelings for Stella, so perhaps they can still have a future down the road.

Elsewhere, some bachelor and bachelorette party chaos will go down. Jordan (Briana Nicole Henry) will have a wild girls’ night while Curtis’ evening with the boys kicks off. Unfortunately, neither bash will turn out as well as they hoped.

Jordan will get trapped with Anna (Finola Hughes), Lulu (Emme Rylan), Maxie (Kirsten Storms) and a few others. She’ll rant at someone to open the door, but it looks like it may be jammed. General Hospital spoilers say Peter (Wes Ramsey) will jiggle a knob somewhere, but he won’t have any luck. It could take some work to free the inadvertent bachelorette party hostages!

Over with Curtis, he’ll also be stuck somewhere with his crew. Curtis will realize they won’t be getting out until morning, so they’ll just have to sit tight and wait for help. Across town, Carly (Laura Wright) will grow suspicious of Ava (Maura West). GH fans know Ava just pulled off phase one of a devious plan. Griffin (Matt Cohen) and Sasha (Sofia Mattsson) are in a compromising position thanks to her.

Carly will ask what’s got Ava so brazen, but she’ll only get a cryptic response. Ava will suggest that things are finally going her way, so Carly may worry about what’s cooking up. In Sasha’s hotel room, Kiki will be stunned by the sight of Griffin in bed with her “sister.” She went over there to confront them after hearing Franco’s (Roger Howarth) big news, but part of her must’ve hoped he was wrong.

General Hospital spoilers say Kiki will unleash her wrath, so stay tuned for that epic blowup. Speaking of blowups, Laura (Genie Francis) will have a slightly less explosive one. However, she’ll still be riled as she demands answers.

Laura will corner “Kevin” aka Ryan (Jon Lindstrom) and demand to know what’s going on with him. She’ll probably ask about his obvious bond with Ava and what their split is really about. Despite Ryan’s previous claims, Laura may think that some cheating has been going on.

Regardless, Ryan is definitely intrigued by Ava and will remain in her orbit. They seem to be moving in a romantic direction, so Laura will just have to deal with that. Ryan’s drama is about to heat up, so we’ll give you updates as other GH details emerge. Stick with the ABC soap and don’t forget to check CDL often for the latest General Hospital spoilers, updates and news.