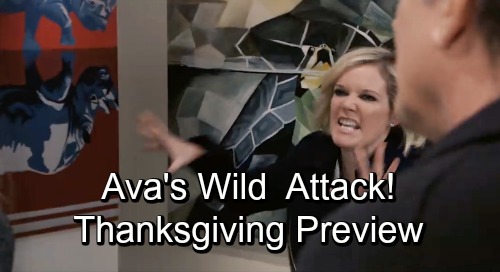 General Hospital’s (GH) new promo video teases that Thanksgiving will be far from drama-free in Port Charles this year! First off, Jason (Steve Burton) is shown arriving at Sam’s (Kelly Monaco) place for the holiday with a package in tow. No doubt it’s those pumpkin donuts that Sam likes so much! Danny (T.K. Weaver) opens the door and welcomes his dad inside.

But it looks like there may be a complication, as Sam sneezes big time. Could she be under the weather for the big Thanksgiving celebration? It looks like she will end up in bed for part or all of the day, and Jason will spend some time with her. Later, Alexis (Nancy Lee Grahn) will show up and Danny will tell her that his mom and dad are upstairs in bed together!

Next, the promo shows Ava (Maura West) and Nina (Michelle Stafford) getting into a vicious altercation at Ava’s gallery, as Ava lunges at Nina. Could this have to do with Sasha (Sofia Mattsson)? Ava’s taken it upon herself to interfere in Sasha and Kiki’s (Hayley Erin) lives and cause trouble there, so maybe Nina will have words for Ava. It doesn’t look like it will end well.

The promo also shows some fast-paced scenes. Cameron (William Lipton) is shown throwing things around in frustration, perhaps over something that will happen between him and Josslyn (Eden McCoy). And Kiki and Griffin (Matt Cohen) are also shown kissing and happily enjoying each other’s company.

Also, Ned (Wally Kurth) and Olivia (Lisa LoCicero) are shown shouting about “pizza,” which could be an indication that something goes awry with the Quartermaine Thanksgiving feast.

Finally, the promo shows a glimpse into Curtis (Donnell Turner) and Jordan’s (Briana Nicole Henry) wedding, which will begin on Monday, November 26. Jordan is shown making her way down the aisle toward a happy-looking Curtis. Of course, the big question is will Stella (Vernee Watson) show up for the wedding?

It looks like we’re in for an exciting Thanksgiving in Port Charles! Be sure to stay tuned for all the drama. We’ll give you updates as other news comes in. Stay tuned to the ABC soap and don’t forget to check CDL often for the latest General Hospital spoilers, updates, and news.