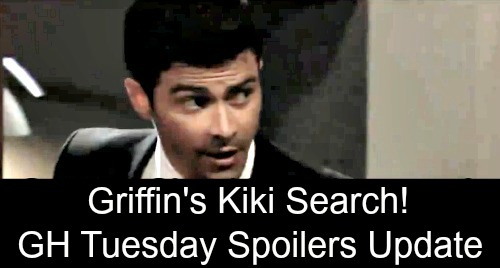 General Hospital (GH) spoilers update for Tuesday, November 27, tease that Carly (Laura Wright) will comfort her daughter. Josslyn (Eden McCoy) just faced a terrible blow, so she’ll really need Carly’s love and support. Oscar (Garren Stitt) doesn’t want to go through with the clinical trial, but he’ll die without it. That’ll be a tough thing for Joss to accept, but Carly will note that this is Oscar’s decision.

Fortunately, Oscar could be leaning in a positive direction. He’ll tell Drew (Billy Miller) and Kim (Tamara Braun) he’s got something to say, but is this the news they’ve been hoping for? Kim always thought Josslyn might be the one person who could get through to Oscar. Perhaps she’ll be right in the end.

Of course, Julian (William deVry) will face Kim’s wrath in the meantime. He reneged on his promise to help with Oscar’s abduction and transport to Brazil, so Kim won’t be happy about that. She was counting on Julian to have her back, but let’s hope she won’t need that desperate strategy anyway.

Other General Hospital spoilers reveal that Stella (Vernee Watson) will bring some wedding chaos. She arrived just in time for objections at the nuptials, but it looks like she won’t complain after all. Instead, Stella will surprise Jordan (Briana Nicole Henry) and Curtis (Donnell Turner) by wishing them well.

Word has it Stella will even hand over the “something old” that Lulu (Emme Rylan) and Maxie (Kirsten Storms) forgot in the confusion. Once Stella’s said what she needs to say, Jordan and Curtis will finish up their lovely ceremony. They’ll celebrate with their first kiss as husband and wife, so it should be a sweet moment for this happy couple.

Over with Peter (Wes Ramsey) and Maxie, they’ll strengthen their connection and keep building toward love. As for Laura (Genie Francis), she’ll remain down in the dumps over “Kevin” aka Ryan’s (Jon Lindstrom) relationship with Ava (Maura West). She won’t get how “Kevin” could leave her for Ava of all people. Lulu will get updates on the latest drama and try to help Laura cope if she can.

At Kiki’s place, she’ll have an eerie confrontation with Ryan. Will she survive it? GH wants us to think Kiki will face her demise in Tuesday’s new GH episode, November 27. That’s certainly a possibility, but there’s also a chance this is a fake-out. Ryan might give Kiki a dire warning and set up the murder that will come later.

Regardless, Griffin (Matt Cohen) will go off in search of Kiki eventually. He’ll arrive back at home and call out her name, so fans will see what state Kiki’s in when he gets there! General Hospital spoilers say some gripping scenes are coming up, so we’ll keep you posted as other info emerges. Stick with ABC’s GH and don’t forget to check CDL often for the latest General Hospital spoilers, updates and news.