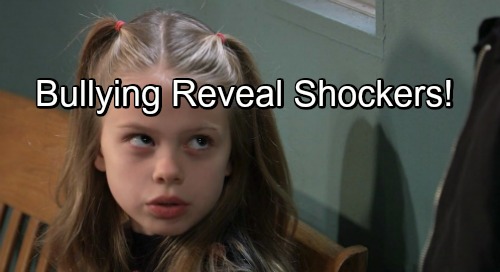 General Hospital (GH) spoilers tease that Lulu (Emme Rylan) and Valentin (James Patrick Stuart) will do their best to handle Charlotte’s (Scarlett Fernandez) bullying. Nina (Michelle Stafford) will naturally pitch in on that as well. Of course, these three are probably a huge reason why Charlotte became a bully in the first place. They’ve always spoiled Charlotte and let her pretty much run the show.

That’s somewhat understandable given all the chaos surrounding Charlotte’s parentage, but it’s still time to take action. Poor Aiden’s (Jason David) suffering thanks to Charlotte’s teasing and constant criticism. It’s really taking a toll on the kid, so changes are necessary. General Hospital spoilers say Charlotte’s support system will try to help her have compassion and find a better attitude.

However, Charlotte’s parents don’t know Aiden’s the one being bullied. Liz (Rebecca Herbst) and Franco (Roger Howarth) also don’t know Charlotte’s the culprit, which is where the real drama comes in! How will the shocking truth come out?

General Hospital spoilers say Lulu will encounter Willow (Katelyn MacMullen) on December 5. Willow will get an invitation in the next episode, so it’s possible Lulu will ask her over to dinner or something along those lines. Lulu might think it’d be helpful for Willow to be involved with the family discussion. Charlotte might be more responsive in a comfortable setting.

That could lead to Charlotte letting something slip about Aiden. Then again, Lulu’s mind may be focused on playing Cupid. She could nudge Chase (Josh Swickard) into asking Willow out like he planned instead. It’d be more dramatic for Liz to find out first anyway!

There are several ways that could happen, so let’s consider a few of them. Finn (Michael Easton) was actually bullied by Charlotte on career day, which means he could offer a hint if pressed. The doc will be awfully busy with his own story though, so Liz may need another source.

Liz might pry the truth out of Aiden himself, but Franco’s another possibility. He mentioned potentially doing an art project with Aiden’s class, which Liz wasn’t too keen on. If Franco does it anyway, he might witness Charlotte’s bullying firsthand.

Regardless, some heated confrontations will break out once the truth is exposed. Liz has been incredibly worried about Aiden, so she may channel her fear and sorrow into anger. Lulu should get the worst of it as Charlotte’s mom, but Valentin and Nina will inevitably get caught in the mayhem. Even Franco may get in on this since he’s trying to become a real part of Liz’s family.

General Hospital spoilers say there are some deeper stories at the heart of this turmoil. This could lead to the reveal of Nina’s real daughter as well as the destruction of Lulu’s marriage to Dante (Dominic Zamprogna). After all, Lulu will have to handle mess without her husband. That’ll add even more strain to this troubled relationship.

Franco and Liz could also hit more speedbumps in the aftermath. They may disagree on how to help Aiden move forward, which could mean another setback for “Friz.” GH fans can probably expect a few bigger surprises, too. It’s clear that some childhood bullying it going to have serious consequences for the adults!

It sounds like the conflict will take center stage soon. We’ll give you updates as other GH news comes in. Stay tuned to the ABC soap and don’t forget to check CDL often for the latest General Hospital spoilers, updates and news.