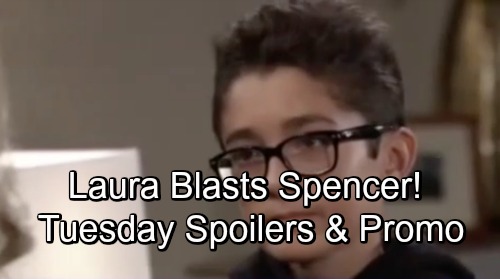 General Hospital (GH) spoilers for Tuesday, October 16, tease that Maxie (Kirsten Storms) will have to do some pretending. She’ll be forced to act surprised, so it sounds like she’ll run into Peter (Wes Ramsey) and Lulu (Emme Rylan). Since Maxie eavesdropped on their conversation, she knows they set a “date” for the film festival in town.

On Tuesday, Maxie will rant about the situation to Nina (Michelle Stafford). She’ll suggest she can’t believe they actually came together. Maxie certainly won’t approve since Lulu’s married to Dante (Dominic Zamprogna). Of course, Maxie’s feelings for Peter should be an issue as well. Nina may point out that it seems like friendly outing, but that won’t stop Maxie from battling jealousy.

Meanwhile, Griffin (Matt Cohen) will realize he made a mistake. He’ll have to tell Kiki (Hayley Erin) that he screwed up and bought the wrong movie tickets. Since they won’t be thrilled about the film they’d have to see, they’ll head back to Kiki’s place instead. It won’t be long until they’re snuggled up together watching a flick of Kiki’s choosing.

Naturally, sparks will fly and these two will end up making love. GH spoilers say Kiki and Griffin will enjoy moving their relationship along. This sex session will definitely mean more to them than a post-Nurse’s Ball fling. Over with Ava (Maura West), she’ll have another chat with Ryan (Jon Lindstrom). They’ll toss back a few drinks as Ava continues to share her dark struggles.

“Kevin” will assure Ava that she’s a remarkable woman, so Ms. Jerome should be flattered and intrigued. If they keep growing closer, it’s going to spell trouble in more ways than one! At home, Laura (Genie Francis) will scold Spencer (Nicholas Bechtel) for following her back to the U.S. He was apparently the one holding flowers at the door.

Spencer will certainly have his reasons for showing up out of the blue. Perhaps he just got used to having his grandmother around and missed her once she left. Regardless, Laura won’t be happy about Spencer jetting off whenever he pleases. She’ll insist that the next time she takes Spencer back to school, he needs to stay there.

Other General Hospital spoilers say Jason (Steve Burton) will visit Monica (Leslie Charleson). He’ll need a favor, but he’ll also wonder what he can do in return. Oscar (Garren Stitt) may be at the center of their discussion. Jason knows Drew’s (Billy Miller) hurting, which means Monica’s hurting, too.

Plus, Monica’s barely had a chance to get to know her grandson. Losing Oscar would be painful for his whole family, but things look bleak at the moment. Oscar’s condition is dire, so he has to undergo that clinical trial to have any hope of survival. Maybe Monica and Jason will consider a plan to help Oscar on Tuesday.

Finally, Sam (Kelly Monaco) will reassure Drew. He told Sam he couldn’t keep leaning on her, but now he’s found himself at her penthouse again. Drew still feels close to Sam, so he can’t help it if he wants her comfort. Sam will promise to be there for Drew during this crisis. She’ll be willing to do whatever he needs, so that should mean a lot to him.