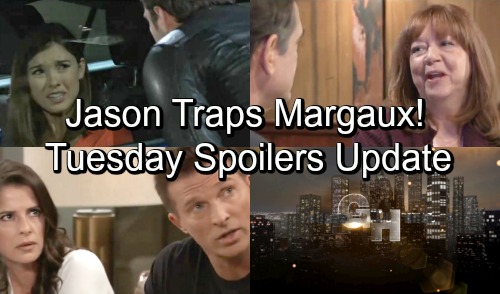 General Hospital (GH) spoilers for Tuesday, October 30, tease that Jason (Steve Burton), Sam (Kelly Monaco) and Sonny (Maurice Benard) will form a plan of attack. They scored some juicy info thanks to the love letters Sam stole. Now they know Jeanette (Ely Pouget) pushed Scully to kill Vincent, so they can definitely use that to their advantage.

Jason will hope that once this information reaches Margaux (Elizabeth Hendrickson), she’ll get rattled and do something risky. With any luck, Margaux will try to cover up her mother’s actions. Jason will want to catch Margaux in a trap and secure enough leverage to keep her at bay.

Meanwhile, Lulu (Emme Rylan) will rage over somebody she spies at The Floating Rib. She’ll be seated with Peter (Wes Ramsey) when she gets a glimpse and lashes out. Peter will probably try to calm Lulu down. He may advise against causing a scene, but will Lulu be able to help herself? General Hospital spoilers hint that some conflict could erupt soon!

Nearby, Mary Pat (Patricia Bethune) will take a walk on the wild side. She won’t realize just how much danger she’s in as she interacts with “Kevin” aka Ryan (Jon Lindstrom). Mary Pat knows Dr. Collins was treating his twin at Ferncliff, but she’s not aware of the switch that came later. She may hope “Kevin” will make keeping the secret worth her while, but he has other ways of taking care of business.

GH spoilers say Mary Pat may become a murder victim later this week. Until then, Carly (Laura Wright) will keep fretting about Ferncliff. After that pointless visit, Carly will worry that nothing’s ever going to change there. Of course, Laura (Genie Francis) shut down that idea. She’ll vow to fight for any patients who are suffering or being treated unfairly.

Michael (Chad Duell) will also reassure Carly, even has he battles his own inner demons. General Hospital spoilers say Michael will have Jonah on his mind in Tuesday’s episode. He’ll act like he’s OK, but he won’t be deep down. Michael’s grief is consuming him, so more struggles are ahead for the troubled Corinthos.

In the prison visiting area, Britt (Kelly Thiebaud) will drive a hard bargain. She’ll insist that Anna’s (Finola Hughes) offer isn’t good enough and push her to make a better one. If Britt’s going to be disloyal to her mom, she’d better have a fantastic reason.

Anna’s offering to get Britt out of jail sooner, but she’ll want a bit more. Britt understands she could be the key to catching Liesl Obrecht (Kathleen Gati). She’ll assume Anna would be willing to give just about anything for peace of mind. After some sparring, Anna and Britt should reach a mutually beneficial agreement.

Finally, Chase (Josh Swickard) will spark some confusion. He’ll corner Willow Tait (Katelyn MacMullen) in her car, so she’ll get pretty creeped out. GH viewers will recall that Willow is Aiden’s (Jason David) teacher, but she’s about to make some other surprising connections.

Chase will want to speak with Willow about something, but he’ll have to apologize first. After he relays how sorry he is for scaring her, Chase can show off his badge. That should settle Willow down enough to talk. General Hospital fans will be anxious to see if Willow can help Chase out.

GH will deliver some terrific scenes on Tuesday, so don’t miss them. We’ll give you updates as other news comes in. Stick with the ABC soap and don’t forget to check CDL often for the latest General Hospital spoilers, updates and news.