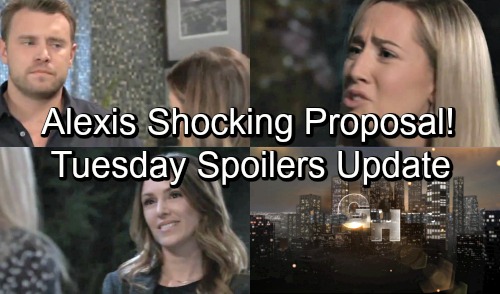 General Hospital (GH) spoilers update for Tuesday, October 9, tease that Liz (Rebecca Herbst) will feel both frustrated and thankful. When she runs into Terry (Cassandra James) at GH, Liz will start off by complaining. She’ll be upset over some Cameron (William Lipton) and Aiden (Jason David) drama, but she’ll quickly learn to count her blessings. Her kids are healthy and headed for long, fulfilling lives.

Sadly, the same can’t be said for Oscar (Garren Stitt). Unless he starts that clinical trial, there’s no hope for Oscar’s future. Even if Oscar gives this treatment a shot, it may not work. In fact, the trial could just end up killing Oscar sooner. That’s why he’s been hesitant to get on board, but Kim (Tamara Braun) will plan to force him.

During a tense conversation with Drew (Billy Miller), Kim will insist that they have to act fast. She’ll think they need to step up and be determined parents. If they don’t make Oscar go through with the trial, they’ll certainly lose him. Kim just won’t be willing to let this final window of hope slip away.

Drew will understand where Kim’s coming from, but he may point out that this is Oscar’s life. Kim already kept the truth from him for two years. Now Oscar feels like his whole world’s falling apart. He’s undoubtedly rebelling because it’s his only form of control. Drew may think a gentler approach would work better, but Kim may argue that there’s no time. This treatment needs to happen ASAP.

Meanwhile, Josslyn (Eden McCoy) will get hurt all over again. She’s naturally confused over Oscar’s sudden decision to push her away. Unfortunately, it appears Joss will remain in the dark on Tuesday. Oscar will urge Josslyn to just accept that they’re over and move on. She’ll want to know how things went downhill so fast, but Oscar will leave her to crumble.

Other General Hospital spoilers say Laura (Genie Francis) will meet with Alexis (Nancy Lee Grahn). She’ll have a pitch to make, so Alexis should listen intently. Will she grant Laura’s request for help? Since Laura’s on a mission to make Valentin (James Patrick Stuart) suffer, perhaps she’ll think Alexis can assist with that.

Over with Margaux (Elizabeth Hendrickson), she’ll warn Sonny (Maurice Benard) and Carly (Laura Wright) of looming trouble. Margaux will want to rattle Sonny’s cage and maybe spark a mistake or two. However, Carly will try to put Margaux in her place. She’ll note that without evidence, Margaux can’t lock Sonny up for anything.

Despite Carly’s confidence, Margaux will refuse to throw in the towel. She’ll promise to get justice if it’s the last thing she does. Across town, Sam (Kelly Monaco) and Jason (Steve Burton) will grow even closer. They’ll share a deep discussion as they build to another sweltering moment.

Alas, a second interruption’s coming up. Alexis spoiled their last sex session and Drew’s about to disturb this one. General Hospital spoilers say some awkwardness is ahead, so stay tuned for some great scenes. We’ll give you updates as other GH news emerges. Stick with the ABC soap and don’t forget to check CDL often for the latest General Hospital spoilers, updates and news.