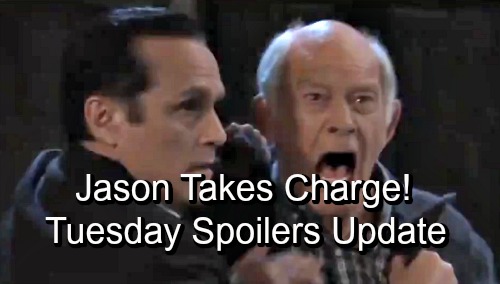 General Hospital (GH) spoilers for Tuesday, September 11, tease that Franco (Roger Howarth) and Liz (Rebecca Herbst) will have a serious conversation. GH fans know Franco tends to keep secrets occasionally, but this time it’ll be more about delaying some troubling news. Liz will wonder why Franco’s just now coming clean, but he may argue that he didn’t think it was necessary.

There’s a good chance this involves Cameron (William Lipton), so we’re building to some big family problems. General Hospital spoilers say we’ll see that rev up as we head into the fall. Meanwhile, Margaux (Elizabeth Hendrickson) will try to get closer to Drew (Billy Miller). She’s obviously got a hidden agenda, but she seems to have the hots for Drew as well.

Of course, Drew’s pretty preoccupied right now. He may join Margaux briefly, but his thoughts will mainly be on Oscar (Garren Stitt). Drew’s struggling to accept that his son’s dying, so he’ll need additional support from Sam (Kelly Monaco) later. Until then, Sam will explain her perspective to Alexis (Nancy Lee Grahn). It looks like Kristina (Lexi Ainsworth) will be the topic of their latest family debate.

Alexis will contend that Sam’s going to regret the invitation she gave. Since Sam’s letting Kristina move in with her, she’ll have to defend her choice. Sam may argue that Kristina deserves a fresh start and a helping hand. She might suggest that Kristina showed real growth by admitting she was wrong and coming home.

Across town, Kristina will escape danger thanks to Jason (Steve Burton). They’ll both survive the gas leak and get out before the worst blast. Mike (Max Gail) will be a mess over the explosion, but relief should quickly follow. Once Sonny (Maurice Benard) realizes Kristina and Jason are OK, he’ll try to settle his father down.

Hopefully, Mike’s recent stunt will be a wake-up call for Sonny. He needs to get his dad in a facility as soon as possible. It’s the only way to keep Mike and everyone around him safe. Jason will warn that no one can breathe a word about Mike’s involvement. It appears he may push Kristina to stay quiet, but Sonny and Mike will get the heads-up, too. They have to make a pact and protect all parties involved.

Unfortunately, Jason and the others can’t stop the investigation. Chase (Josh Swickard) will stop by in Tuesday’s new GH episode and immediately get to work. He’ll take a look around and ask if Julian’s (William deVry) sure someone intentionally caused the chaos. When Julian maintains that it was deliberate, Chase will start digging for answers about the crime. He’ll hope he can get Julian some justice.

General Hospital spoilers say Julian will contact Alexis at some point. He’ll let her know that Kristina was caught in a perilous situation. Alexis should freak, but at least she’ll get positive updates eventually. Kristina will be safe and sound, so that’s all that matters.

GH viewers will want to tune in for some high-stakes drama. We’ll keep you posted as other details emerge. Stick with the ABC soap and don’t forget to check CDL often for the latest General Hospital spoilers, updates and news.