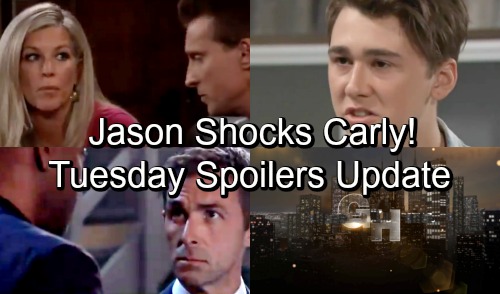 General Hospital (GH) spoilers update for Tuesday, September 25, tease that Valentin (James Patrick Stuart) will be put on notice. Curtis (Donnell Turner) has been uneasy throughout this daughter investigation. That’s why he’ll plan to abandon it if the Sasha (Sofia Mattson) lead doesn’t pan out. Curtis will hope that Sasha’s a match, but he won’t keep up his mission if the DNA test results are negative.

Of course, Curtis might change his mind if Valentin pushes hard enough. For now, they’ll both just count on confirmation. If Sasha’s the real deal, they won’t have to worry about Curtis’ next move. While they discuss the matter, Nina (Michelle Stafford) will enjoy a bittersweet outing with Charlotte (Scarlett Fernandez). She loves that kid with all her heart, but this day could make her a bit wistful.

Nina’s been a great stepmom to Charlotte, but she’d love to get to know her own flesh and blood, too. Besides, things are bound to change a little thanks to the divorce. Charlotte will even bring that up on Tuesday’s new GH episode, September 25. She’ll fear this could be the last time they get to hang out, but Nina will promise that’s not the case. Charlotte will remain in Nina’s life, even if they don’t see each other as often.

Elsewhere, Julian (William deVry) will get a shocking request. Brad (Parry Shen) will be in the midst of a major freak-out when he finds Julian. He’ll believe Lucas (Ryan Carnes) is going to uncover the baby swap, so he’ll seek help with a cover-up. Brad may hope Julian’s willing to falsify the birth mom’s medical records. That might be the only way to keep “Wiley’s” heart condition from raising red flags.

Julian will feel like they’d be getting in too deep. He’s already taken drastic action to help Lucas and Brad keep custody. Since another stunt would be risky, Julian will warn Brad to keep his mouth shut and see what happens. There’s no point in making a bigger mess if they don’t have to.

Other General Hospital spoilers say Drew (Billy Miller) and Kim (Tamara Braun) will face backlash. At GH, Oscar (Garren Stitt) will demand more answers. Once his parents confirm that he’s dying, Oscar will ask how long they’ve known he had cancer. Kim will have to come clean about hiding the truth from her son. She’ll admit that she’s known quite a while, but Drew was only brought in the loop recently.

Oscar will be furious with them both, but Kim may get the bulk of his wrath. Nevertheless, both Drew and Kim will be kept at a distance in the coming weeks. Oscar will certainly feel broken and alone. Over with Stella (Vernee Watson), she’ll join Jordan (Briana Nicole Henry) for a significant discussion. She’ll be intrigued by this meeting and what Jordan intends to tell her.

There’s a good chance Jordan will take another stab at peace. She might as well give it another shot and hope it sticks this time. Across town, Carly (Laura Wright) will have questions for Jason (Steve Burton). She’ll seem worried as she brings up the case Margaux (Elizabeth Hendrickson) and Jordan are building.

Carly will wonder if the gun is the only reason to be concerned here. She’ll ask if there’s something else that might trip Sonny (Maurice Benard) up. Jason may share the explosive tidbit that Margaux just divulged. The human remains belonged to her father, so her takedown determination it at an all-time high.

Margaux’s vengeful desires are spiraling out of control, so Sonny will have to watch his back! We’ll give you updates as other General Hospital news comes in. Stay tuned to ABC’s GH and don’t forget to check CDL often for the latest General Hospital spoilers, updates and news.