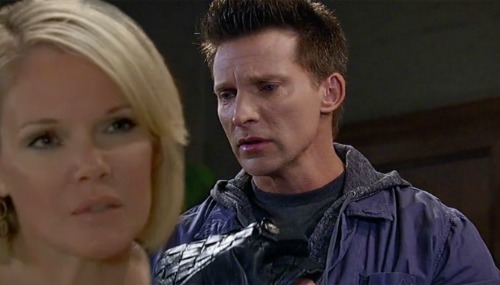 General Hospital (GH) spoilers tease that Ava (Maura West) will seek support from a surprising source. During the week of October 1-5, Ava will hope to rely on Jason (Steve Burton). GH fans know these two have a complicated history. Ava stumbled across Jason back when he was Patient Six at the Russian clinic. She played a big role in helping Jason score his freedom.

Jason probably wouldn’t be back home with his loved ones right now if Ava hadn’t pitched in. He was grateful enough to help her out with her facial reconstruction, but that was before he found out about the Morgan (Bryan Craig) pill swap. Jason promptly declared that they were even, so that severed any chance of a friendship – or so it seemed.

Could there be hope for Ava and Jason’s bond after all? Some GH fans actually saw some chemistry between them. Friendship would be nice, but a romance would be even better. Can you imagine how Carly (Laura Wright) would react to a Jason and Ava pairing? That alone would make this storyline worthwhile!

Jason and Carly’s connection is sweet, but sometimes it can get a little dull. No matter what Carly does, Jason just puts up with it. He has to come along and clean up all Sonny’s messes, too. Jason basically exists to get the Corinthos clan out of trouble. What about Jason’s own life? He doesn’t get much of one since he’s so wrapped up in Sonny and Carly’s drama.

Ava’s single now, so she could use a new love interest. Jason could probably use one, too. Sam (Kelly Monaco) will always be Jason’s true love, but when is GH going to reunite them? It’s been over a year since Steve Burton came back to General Hospital. Sam’s divorced and has feelings for Jason, so what’s stopping her?

It seems like some behind-the-scenes issues may be getting in the way. Why else would GH be dragging their feet on one of the show’s most popular couples? If “JaSam” isn’t happening anytime soon, Jason should be allowed out of love limbo. A pairing with Ava would be problematic in a delicious, soapy kind of way. It’d be fun to at least see a fling – just to shake things up!

Of course, Ava will just need some support for now. There’s no word on what this is about, but the point is she’ll turn to Jason. That could certainly mean something as this story moves forward. Do you think Ava and Jason should get together? Should they be a couple or perhaps just hook up?