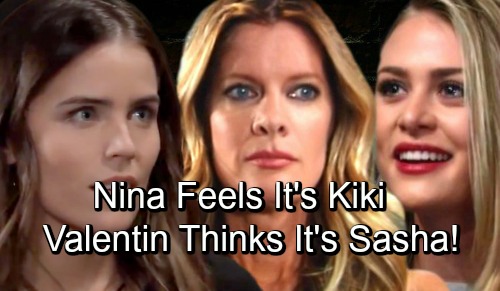 General Hospital (GH) spoilers tease that Curtis (Donnell Turner) will be the victim of a misunderstanding. He’ll face some confusion this week, September 24-28, which may spell trouble since he’s waiting on some DNA test results. Later, Valentin (James Patrick Stuart) will be thrilled over Curtis’ progress. Does GH have some sort of mix-up in store?

Everything’s been a little too easy for Valentin and Curtis so far. We all know Curtis has some great investigative skills, but this whole journey has gone far too smoothly. Since when are long-lost children found so quickly on a soap? Something’s off about all this, especially since General Hospital’s dropping major hints about Kiki (Hayley Erin) being Nina’s (Michelle Stafford) daughter.

As far as we know, there was only one child. GH has enough twin drama going on, so it looks like they’ll stick with the story of a single daughter. That means it can be Sasha (Sofia Mattsson) or Kiki, but it can’t be both. General Hospital spoilers say Nina will get some news that leaves her shaken soon. It could involve the possibility that Kiki’s the kid she’s missing.

If Valentin’s convinced that Sasha is Nina’s daughter and Nina’s convinced that it’s Kiki, somebody has to be wrong here. Who’s it going to be? General Hospital may keep fans in the dark for a while and let some shockers play out. During the week of October 1-5, Nina will keep a secret from Valentin. She may have some suspicious about Kiki, but she probably won’t want to fill Valentin in on those at first.

However, Nina may be forced to question her own hunch when Valentin’s claims are presented. What if Valentin shows off DNA proof, but Nina still feels a strange and sudden connection to Kiki? She may be drawn to Kiki despite what the evidence suggests. That could be a clue that the evidence won’t be what it seems to be. There’s a chance we’ll see some rigged tests or just plain old mistakes.