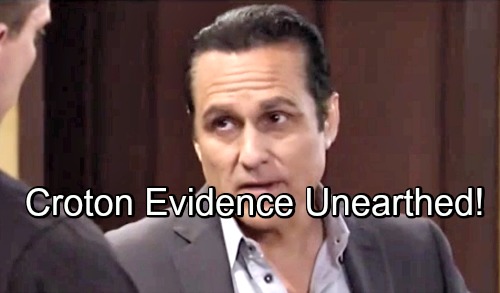 General Hospital spoilers (GH) tease that Julian Jerome’s (William DeVry) expansion plans could unearth a deadly secret! Mike Corbin (Max Gail) seemed to recognize a picture of Charlie Delaney, the original owner of Charlie’s Pub. Whether Mike knew Charlie or just someone who looked like him, there’s likely a connection between the pub and the body from Croton.

GH fans know the pub itself has been at that spot for many years. Perhaps Julian purchased an empty lot next to it so he’ll have room to grow. Could the body be buried there? Anytime construction gets underway, you have to start digging up ground. This is to allow for strong foundations as well as pipes for water, sewer and possibly gas or oil to be laid.

To keep the water pipes protected from freezing weather in Port Charles, it would require some deep digging. If Julian’s construction crew starts disturbing things down there, what else might they uncover? They may expose some human remains!

Sonny Corinthos (Maurice Benard) is desperate to stop his first major crime from being exposed. He didn’t actually commit the murder, but he was responsible for burying the corpse and the gun. Sonny’s worried that his DNA may be left on that weapon. If so, he could go down for this mess from decades ago.

There’s a good chance the any DNA Sonny left behind would be ruined by now. The elements probably took a toll, so a match might be impossible. Still, Sonny can’t shake the feeling that technology’s progressed enough to trip him up. He can’t rest until he knows what Mike did with the evidence.

If Sonny’s right, a discovery during this expansion project would be disastrous. Sonny could be slapped with murder charges and thrown in Pentonville. Mike knows someone else actually did the deed, but he could just make matters worse if he tries to help. General Hospital viewers know Mike moved the body, so he could be charged as an accessory as well.