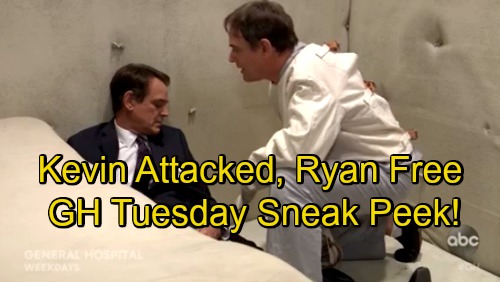 General Hospital (GH) spoilers for Tuesday, September 4, tease that Kevin (Jon Lindstrom) will find himself unconscious after a vicious attack. Ryan will use the straps of his straitjacket to choke his brother, so he’s proving he’s a very resourceful guy! Kevin will gasp until he passes out, which will give Ryan a chance to swap places with him.

Before the switch, Ryan will marvel at Kevin’s stupidity. He’ll drag his twin over to the wall and express surprise that Kevin let him do this again. However, Ryan will ultimately determine that trust is the real problem. Kevin wants to see the best in people or at least have hope that they can change.

Unfortunately, that proved to be Kevin’s downfall in this case. General Hospital spoilers say Ryan will wrap up his little speech and get to work. He’s got places to go and people to see! Ryan will slip his straitjacket off and put it on Kevin. He’ll take Kevin’s suit for himself and walk out of Ferncliff with ease.

Dr. Collins is in for a shock when he awakens later. He’ll urge the orderly to believe he’s the real doc, but that plan won’t work. Ryan’s already been trying that tactic, but it got him nowhere. It looks like Kevin will just have to suffer for a while.

As for Ryan, he’ll be thrilled over his newfound freedom. General Hospital spoilers state that GH will be Ryan’s first stop. He’ll be downright giddy as he kicks off his latest Kevin impersonation. Ryan will happily greet staff members and other friendly faces. He’ll be eager to dupe all of Port Charles and maybe even take a few lives in the process!

General Hospital spoilers hint that Ryan will naturally hit a snag or two along the way. Nevertheless, he’ll manage to play it cool. Ryan’s a pro at deception, so he’ll do his best to handle any hurdles that pop up. Kevin’s evil twin will inevitably get caught, but not anytime soon!

Are you excited about what Ryan’s cooking up? Who will save Kevin and reveal the switch? How long will the poor doctor be stuck at Ferncliff? We’ll give you updates as other GH news comes in. Stay tuned to the ABC soap and don’t forget to check CDL often for the latest General Hospital spoilers, updates and news.