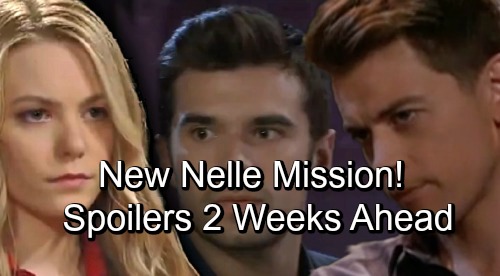 General Hospital (GH) spoilers tease that Nelle (Chloe Lanier) will remain a crucial part of the story. She recently finished off a two-episode return stint, but that’s not the last we’ll see of her. Nelle will undoubtedly resurface for the fallout of her baby swap scheme with Brad (Parry Shen). It’ll take some time, but several Port Charles residents will inch closer to the truth about “Wiley.”

Brad’s doing his best to keep everything under wraps, but it’s not easy. The clues are piling up, so someone’s bound to put all this together eventually. Who might that be? There’s no shortage of people involved in this storyline, but a new key player is emerging. As luck would have it, he just might have the skills to solve this mystery.

Of course, we’re talking about Detective Harrison Chase (Josh Swickard)! He hasn’t had much to do in PC since he took Nelle down. General Hospital might as well bring him into the swap drama and let him shake things up.

At the courthouse, Chase had some harsh words for his former flame. He was thrilled that “Janelle” got what she had coming. However, Nelle suggested that Chase would never forget what they shared. She warned that Chase wouldn’t find another woman like her – and she’s probably right about that!

Chase also watched Nelle gush over “Wiley” and listened as she requested a moment alone with Brad. The detective may have stashed those tidbits in his mental Nelle file. They could come in handy as other hints pop up.

On November 1, General Hospital spoilers say Chase will hang out with Michael (Chad Duell). They’ll kick off the month with a somewhat glum bonding session. In a weird way, Nelle brought these two together as friends. They share the unique experience of being duped by Nelle and watching their lives burn down around them. That’s exactly what Michael and Chase will discuss in their next chat.

It’s significant that GH will have a scene about this. There must be a reason for the guys to meet and vent about Nelle. Will Michael bring up the cryptic letter he received? He might talk about how Nelle pushed him to get close to “Wiley.” Michael could also mention “Wiley’s” heart condition in passing.

When Chase pairs Michael’s info with what he personally saw at the courthouse, the wheels could start turning. Chase was the one to bring Nelle to justice. Will he be the one to uncover the baby switch shocker, too? We’ll give you updates as other GH news comes in. Stay tuned to the ABC soap and don’t forget to check CDL often for the latest General Hospital spoilers, updates and news.