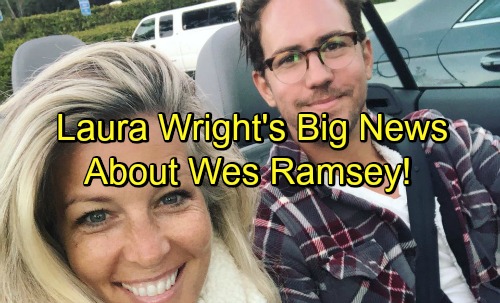 General Hospital (GH) spoilers is pleased to pass on some information about a GH’s star’s new project courtesy of fan favorite Laura Wright (Carly Corinthos). Wes Ramsey, who portrays Peter August on the ABC soap, is appearing in a new movie premiering on October 18 at the Downtown Los Angeles Film Festival. The movie is titled “Perception” and stars Wes in the lead role.

“Perception” is described as a sexy supernatural thriller. Wes plays the part of Daniel, a real-estate developer who must evict a psychic who is struggling to provide for her young son. The psychic offers Daniel a free reading, during which she senses the spirit of his deceased wife. Daniel then becomes obsessed with connecting with his wife, but the spirit may have plans of her own.

Laura Wright, who portrays Carly Corinthos on GH and is Wes’s girlfriend, posted a photo of Wes and a sweet message to him on her Instagram feed ahead of the premiere. Laura’s message reads: “Super happy for you @wes_ramsey and so proud to stand next to you tonight at the premiere of your movie Perception at the @dtlafilmfest. You are amazing baby!!! I love watching you shine!!!!”

The movie sounds great, but so far, “Perception” is scheduled for release only at the Downtown Los Angeles Film Festival. Hopefully for Wes’s fans, the movie will become more widely available soon.

“Perception” is one of several films Wes has been involved in while also portraying Peter August on GH. But it doesn’t look like fans have to worry about him leaving; it appears that Wes is sticking with GH for the time being.

Are you excited for Wes and his new movie? Stay tuned to the ABC soap and don’t forget to check CDL often for the latest General Hospital spoilers, updates, and news.

Super happy for you @wes_ramsey and so proud to stand next to you tonight at the premiere of your movie Perception at the @dtlafilmfest You are amazing baby!!!! I love watching you shine !!!! #lifeisbeautiful #youaremakingithappen #grateful