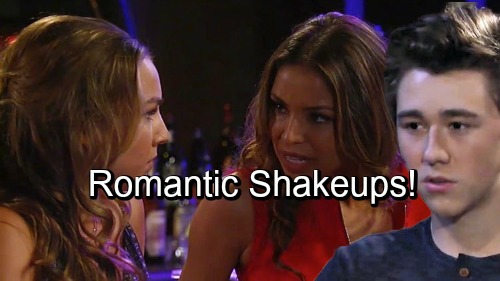 General Hospital (GH) spoilers tease that Kristina (Lexi Ainsworth) and Valerie (Brytni Sarpy) will continue to bond. Ever since Kristina returned to Port Charles, Valerie’s been eager to hang out. After she was promoted to detective, Valerie noticed Kristina seemed a bit down in the dumps. That led to a deep conversation between them and plenty of warm moments.

Kristina’s feeling pretty lost these days, so Valerie just wants to help. She believes Kristina will find her own path on her own time. There’s no need for Kristina to compare herself to everybody else. She doesn’t want to be a bartender forever, but perhaps that’s exactly where she’s supposed to be right now. There’s certainly a good reason GH has Kristina behind the bar.

Oscar (Garren Stitt) will learn some tips and tricks from Kristina next week. It looks like he’ll do some job shadowing, which could take his mind off his troubles. Oscar’s warming up to Julian (William deVry), so he may hang out at Charlie’s Pub and watch Kristina show off her skills. Anything that lifts Oscar’s spirits is great. He’s in a dark place at the moment, so Kristina will help more than she knows.

Maybe Oscar will even assist Kristina in some way. Thanks to his terminal cancer, he understands how valuable time is. Oscar may push Kristina to go after what she wants and make her dreams happen ASAP. Kristina has to find out what those dreams are first, but she could still be inspired. This could be the start of a new chapter both personally and professionally.

That brings us back to Valerie. What role will she play in Kristina’s life? Will she remain the loyal friend or will things cross over into romantic territory? Since Valerie and Kristina have really been connecting, no one would be surprised by the latter. We could at least see Kristina struggle with feelings she thinks won’t be reciprocated.

Valerie might catch Kristina off guard by feeling the same way. She may even shock herself by falling for her gal pal. General Hospital spoilers hint that the situation could get complicated, but it sounds like an intriguing story could be brewing.

Are you curious about what’s ahead for Kristina and Valerie? Will they stay on different paths or will they become a GH couple? We’ll give you updates as other General Hospital news comes in. Stick with the ABC soap and don’t forget to check CDL often for the latest General Hospital spoilers, updates and news.