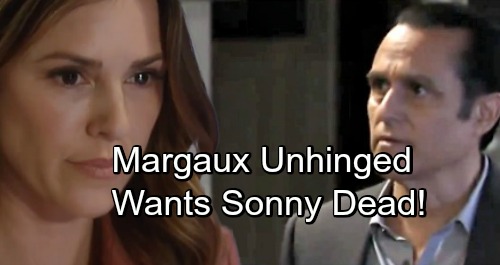 General Hospital (GH) spoilers tease that Margaux (Elizabeth Hendrickson) will grow impatient. She’s had it in for Sonny (Maurice Benard) from the moment she hit town, but now her rage is really spiraling out of control. Surprisingly, Margaux was in the dark on how her father died. She didn’t even know for sure he was dead.

That’s why it was a huge shock when Vincent Marino’s name came up in this investigation. The human remains were identified as Margaux’s deceased dad, so she’ll be coming after Sonny with everything she’s got. General Hospital spoilers say Margaux will back off the Mike (Max Gail) angle and try another tactic. She’ll hope she can somehow trip Sonny up, but he can be awfully crafty.

Sonny’s got Jason (Steve Burton) in his corner, which will make Margaux’s mission extra difficult. Jason would do just about anything for his boss and close pal. If there’s a problem, GH fans know Jason can usually handle it. He just steps up and gets the job done!

There’s a good chance Jason will get in Margaux’s way soon enough. Of course, the case itself may present issues. On next week’s new GH episodes, October 1-5,  Jordan (Briana Nicole Henry) will have some unfortunate news to pass along. Perhaps there won’t be evidence that truly ties Sonny to this body. The missing gun may not be found or may not have Sonny’s DNA on it after all.

However, Margaux won’t give up on her pursuit of justice. She’ll be determined to avenge her father’s death by any means necessary. When Margaux learned the truth, she had a pretty intense reaction. Margaux seemed like she temporarily came unhinged, which could be a hint about where things are headed.

It’s worth mentioning that Hendrickson played a crazy character on The Young and the Restless. Y&R’s Chloe went to great lengths to avenge her daughter’s death. Sounds a little familiar, doesn’t it? Since Hendrickson portrays that kind of role so well, maybe GH wants to do a similar arc.

If Margaux can’t take Sonny down in court, will she be pushed over the edge? Margaux might resort to drastic measures. It’s easy to imagine Margaux staring Sonny down with a scowl and tear-filled eyes. She could point a gun and vow to make Sonny suffer the same fate as her dad.