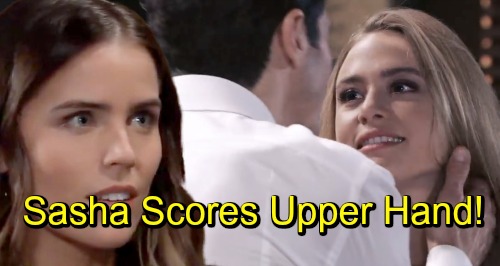 General Hospital (GH) spoilers tease that Sasha (Sofia Mattsson) will have a surprising realization. After Kiki (Hayley Erin) confronted her new “sister,” Sasha insisted she’d simply gotten the wrong idea about Kiki and Griffin (Matt Cohen). Thanks to Ava (Maura West), Sasha assumed they were basically friends with benefits. She promised to back off, but still got kicked out of the apartment.

That led to a confrontation with Ava and the desire to relax after a taxing day. Sasha opted to have some soup delivered to her room, which gave Ava the opportunity to drug it. Naturally, that’s going to cause major problems in the coming episodes. Ava will make sure Sasha wakes up in bed with Griffin and Kiki will be the one who finds them together.

It sounds like Sasha could have mixed feelings about this mess. If she eventually figures out Ava drugged her, she’ll have to be outraged. That kind of behavior is uncalled for. Ava clearly learned nothing from all the Morgan (Bryan Craig) pill-swap drama. It’s not a good idea to have plans that revolve around meds!

Nevertheless, that’s the strategy Ava has chosen – with a little nudge from Ryan (Jon Lindstrom). Although Sasha may be livid over her initial discovery, she could change her tune a bit later. After all, GH spoilers say this could work to her advantage. Kiki will likely dump Griffin, so that’ll give Sasha a chance to make a real move.

When it comes to romance, Griffin’s the kind of guy who moves on fast. He also loves a good damsel in distress and we all know Sasha’s great at charades. She could act terribly hurt about the misunderstanding and Kiki’s rejection. Since Griffin should be facing that same rejection, it could bring them together.

You can bet Valentin (James Patrick Stuart) will disapprove. If Sasha starts establishing a love life in Port Charles, it’ll be even harder to get rid of her. General Hospital spoilers say Sasha will become more and more bold around her partner in crime. She’s not scared of Valentin and his many threats.

During the week of November 26-30, Valentin will get a fierce warning. Will that be from Sasha? Will she make it clear that she’s sticking around and will do what she wants, when she wants? Valentin may have no choice but to relent. Sasha’s sitting on a huge secret and Valentin’s got a lot to lose if it gets out. Nina (Michelle Stafford) would hate Valentin’s guts over his daughter deception.

Of course, General Hospital fans know that secret will come out no matter what. It’s just a matter of time before Sasha is revealed as a phony! We’ll give you updates as other GH news comes in. Stick with the ABC soap and don’t forget to check CDL often for the latest General Hospital spoilers, updates and news.