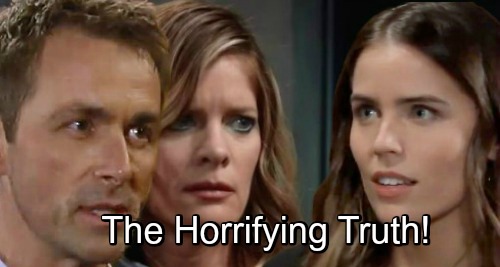 General Hospital (GH) spoilers tease that Valentin (James Patrick Stuart) will grow increasingly concerned about his plan. He obviously hoped to play the hero and reunite Nina (Michelle Stafford) with her long-lost daughter. Valentin must’ve known it’d be his best shot at getting back together with Nina. He needed a way to earn some serious points and start inching toward happiness again.

Unfortunately, Valentin didn’t count on Sasha being so problematic. He probably thought she’d just pop in town, make nice with Nina and leave. Valentin may have envisioned visits here and there. He could’ve paid Sasha to check in with Nina from time to time and that’d be that.

However, Sasha has already overstayed her welcome – at least according to Valentin. He’s worried that the truth about his deception’s going to come out. The longer Sasha stays, the closer to Nina she’ll get. That’ll bring more opportunities for exposure, so that can’t be good news.

General Hospital spoilers say the drama with Kiki (Hayley Erin) won’t help the situation. As Sasha makes more moves on Griffin (Matt Cohen), the “sister” conflict will heat up. That’ll spark some serious GH confrontations between Nina and Ava (Maura West), which will create an even bigger mess.

Before Valentin knows it, his Sasha scheme will start to crumble. He’ll undoubtedly rev up his threats, but Sasha won’t be scared. She knows how much is at stake for Valentin, so she won’t think she has to listen to him. Sasha can just threaten Valentin right back, but that may not be the best idea.

If Nina turns against Sasha after the truth comes out, Valentin will have no use for her. He’s the kind of guy who can make people disappear, so Sasha might want to dial down the confidence! As for Valentin’s chance with Nina, he’ll most likely blow it big time.

Nina was already struggling with trust issues, but this will really send her over the edge. It’ll be tough for Valentin to come back from this kind of devastation. Will Valentin and Nina be over for good? We’ll give you updates as other General Hospital details emerge. Stick with ABC’s GH and don’t forget to check CDL often for the latest General Hospital spoilers, updates and news.