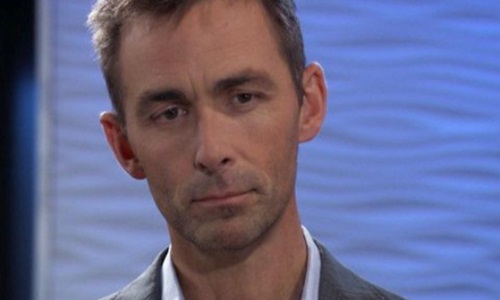 General Hospital (GH) spoilers tease that Valentin (James Patrick Stuart) and Nina (Michelle Stafford) will continue their separate searches. They’re both eager to learn more about Nina’s long-lost child, but they’re at different stages here. It seems Valentin could be poised to get the scoop first.

Valentin has Curtis (Donnell Turner) on the case, so they’ve been making some progress. It’s slow, but steady. Valentin also has inside knowledge from Madeline (Donna Mills) on his side. She admitted that Nina gave birth to a daughter, so that narrows down the search a bit. All poor Nina’s got to go on is half a heart pendant! She’ll struggle to learn anything more in the coming weeks.

Valentin, on the other hand, may get much closer to the truth. Curtis just delivered a major breakthrough in the case. He found a payment that was made to the lawyer Madeline used, which happened to be from single mother. This mom has a daughter who’s the same age as Nina’s child would be today.

General Hospital spoilers say Valentin will hope the lead gets them somewhere. He’ll be so focused on the hunt that he sort of shuts Nina out. She’ll be confused by what she’ll perceive as lack of interest. Nina has undoubtedly been wondering why Valentin seemingly gave up anyway. He’s really just concentrating on his goal, but Nina may be doubting the connection they still share.

In a new issue of Soap Opera Digest, GH’s Michelle Stafford was asked about that. Is Nina suspicious of Valentin’s sudden change in behavior? “She’s not suspicious, she’s just like, ‘Why don’t you want me anymore? How come you’re not pining away for me? She’s like ‘Even though I don’t want you anymore, I want you to want me.’”

Of course, everything will shift if Valentin reunites Nina with her daughter. She’ll see that he indeed loves her enough to move mountains. Nina may think she no longer wants Valentin, but she may revaluate her feelings thanks to his grand gesture. There’s nothing Nina wants more than a child, so granting that request will mean the world to her.