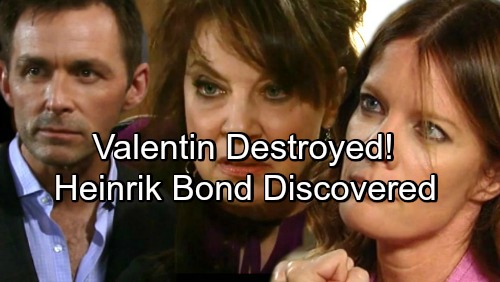 Valentin has many secrets and he’d like to keep all of them to himself. He certainly wouldn’t want Nina or Anna (Finola Hughes) to learn his shockers. For the most part, Peter thinks everything is under control. If he could just eliminate Anna, Peter would feel completely confident.

Of course, Valentin isn’t convinced they’re in the clear. He knows that if Nina finds out his Heinrik connection, major drama will go down. Valentin’s marriage could be torn apart by deception and deep Faison ties. He doesn’t want Nina to discover that he worked for Cesar Faison (Anders Hove) and later mentored his son.

Valentin mentioned his “vacation” idea to Nina, which left her pretty puzzled. She wasn’t too keen on being whisked away, but she suggested she’d mull it over. However, General Hospital spoilers say Valentin will struggle to get Nina on board. She’ll probably want to stay in Port Charles for Maxie (Kirsten Storms), who’ll be giving birth soon.

Unfortunately, that means Valentin’s plan will fall through and he’ll have to face the music eventually. GH spoilers state that Valentin will get busted! He’ll scramble to explain, but Nina may not want to hear her lying hubby’s excuses.

Faison killed Nathan (Ryan Paevey), so any kind of link to him will be a real problem for Nina. Heinrik provoked his father into tracking him down, which ultimately resulted in Nathan’s death. Nina will be furious that Valentin had anything to do with these two. Can their relationship recover from this? It’s tough to say, but Valentin will definitely fight for Nina and their family.

Naturally, Valentin will face Anna’s wrath as well. He’s known Peter was her son all along, but he chose to deceive them both. Valentin obviously has Russian clinic ties since he sent Ava (Maura West) there, so memory mapping mayhem could be brewing, too. He might’ve been able to save Drew (Billy Miller) and Jason (Steve Burton) from suffering, but Valentin was more worried about self-preservation.

Let’s not forget about Dr. Obrecht (Kathleen Gati) – how enraged will she be when she learns that Valentin bears some responsibility for her dear son Nathan’s death – Dr. O has killed before to protect Nathan.

In other words, Valentin’s about to be even more hated around town! General Hospital spoilers say his world will blow up and there’s nothing he can do about it. Will Valentin lose his marriage? Will Peter plot against him? Will Anna, Jason and Drew unleash their fury?

It sounds like GH has some great material coming up. We’ll give you updates as other news emerges. Stick with the ABC soap and don’t forget to check CDL often for the latest General Hospital spoilers, updates and news.