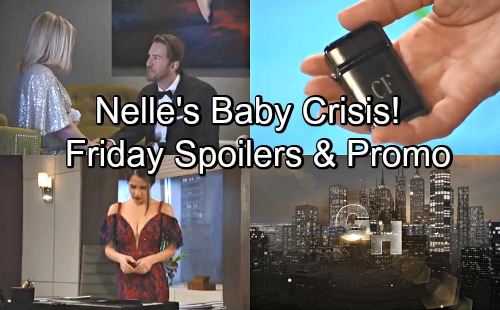 General Hospital (GH) spoilers for Friday, May 18, tease that Maxie (Kirsten Storms) will decide she’d like to go home. Curtis’ (Donnell Turner) proposal to Jordan (Vinessa Antoine) was truly magical, but it brought up some pain for Maxie. Now she’s got Nathan (Ryan Paevey) on her mind, so she might as well bail. It would be tough for Maxie to have any fun in this state.

Peter will gladly agree to take Maxie back to her apartment, but there’ll be a change of plans. Maxie’s baby has already been quite active, but he or she will decide it’s time to make a big debut soon. General Hospital spoilers say Maxie will realize she’s in labor, so Peter will undoubtedly rush her to GH if possible. This will put his perilous meeting with Anna (Finola Hughes) on hold.

Over with Valentin (James Patrick Stuart), it looks like he’ll beg Nina (Michelle Stafford) to ditch the rest of the party. Valentin wants to kick that “vacation” off ASAP. Little does Nina know he wants it to last forever! Of course, Maxie’s baby drama will prevent Valentin from getting his wish. He’ll only succeed in stirring up Nina’s suspicions on Friday’s episode.

Other General Hospital spoilers say Finn (Michael Easton) will finish his sweet speech. He saw Anna’s will, so he assumes she’s knocking on death’s door. Finn couldn’t let Anna die without letting her know how much he cares about her. He’ll just be sorry that it took so long to come clean.

Anna will have tears in her eyes as Finn wraps this up. She’ll quickly explain that death isn’t imminent. Nevertheless, Finn’s confession should help these two grow closer. Now that they’re being honest, they need to see if they can make this romance work.

At GH, Nelle’s (Chloe Lanier) monitors will go haywire. She’ll panic and ask Michael (Chad Duell) what’s happening. Nelle will fear that something’s wrong with the baby, but Michael won’t seem too worried. It may be a disconnected cord or some other error that causes all the beeping.

Then again, Michael could be putting on a brave face for Nelle’s sake. He certainly wouldn’t want to add to her concerns and make things worse. Meanwhile, Oscar (Garren Stitt) will give Drew (Billy Miller) a hug backstage at the Nurses Ball. He’ll thank his dad for being there for him, so this should be a special moment.

Stella (Vernee Watson) will also have some advice for Sonny (Maurice Benard) on Friday. He won’t think it’s a good idea to show the world how you feel, but Stella may disagree. She might think a little vulnerability is the right call sometimes.

Elsewhere, Sam (Kelly Monaco) will tell Jason (Steve Burton) all about finding Faison’s (Anders Hove) lighter. She was stunned to see it in Peter’s (Wes Ramsey) office, so she’ll be anxious to spill this huge news. Jason should realize that Peter stole the lighter as a memento. This could finally help him make the Heinrik connection, but he’ll warn Sam that somebody’s going to get hurt.

Danger is indeed brewing in Port Charles! We’ll give you updates as other GH details emerge. Stay tuned to the ABC soap and don’t forget to check CDL often for the latest General Hospital spoilers, updates and news.